Halberdier
[view]
“Crimean soldiers! How dare you turn your weapons against us! You will pay for this betrayal. Men, burn these shanties to the ground! Show these fools what we do to traitors!”
—Roark in Radiant Dawn.

Roark (ラオ Rao) is a boss character from Fire Emblem: Radiant Dawn. He was a Begnion army commander who led a pillage of a village in the countryside of Crimea. He met his end at the hands of the Crimean Royal Knights, led by Geoffrey.

Geoffrey: I am Geoffrey, the commander of the Crimean Royal Knights! Do you command these men?
Roark: Knight of Crimea. You are clearly guilty of treason against the Begnion Empire! Do you understand what it means to send an army against us? You’ve just killed your people.
Geoffrey: You have been warned. Queen Elincia will not accept any further acts of violence and banditry within our borders! Withdraw your troops immediately, or I cannot guarantee your safe return! Decide quickly.
Roark: How dare you take that tone with me! I’ll put you in your place!

Roark: The empire will not forget this... Once our main forces arrive, they will slaughter you like cattle! 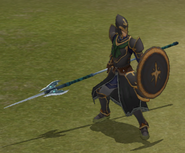