General
[view]
“S-someone! Come to my aid! All is lost if I fall! ”
—Roartz in The Binding Blade.

Roartz is the boss of Chapter 20A: The Liberation of Ilia (Ilia)/Chapter 20B: The Silver Wolf (Sacae) in Fire Emblem: The Binding Blade. Roartz is one of the two cowardly Etrurian nobles who turned against their country and joined Bern when King Mordred was captured. In Chapter 20A, he was put in charge of Murdock's Ilian headquarters, Castle Edessa, which formerly belonged to Zelot, leader of the Ilian mercenary knights, after Murdock decided to return to Bern. In Chapter 20B, he was defending a large manor on the outskirts of Bulgar against Roy and his army after Brunya decided to return to Bern.

Roartz: Douglas... Hmph! After all that you said, you've gone back on your honor!
Douglas: Indeed it may appear that way. But I fight true. I fight with my heart and I have confidence in our cause.
Roartz: Silence! Enough of your nonsensical rambling. Die here! 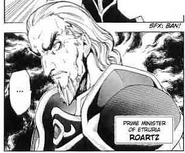