Map 4: Tragic Soldiers (joins in Map 7: Liberation of the Capital)

“Mel... Why was I born into nobility? Why did I become a paladin? If only I were a commoner, I would be able to live in peace together with you...”
—Roger, expressing his desperation in a conversation with Mel

Roger (ロジャー Rojā) is a playable character from TearRing Saga: Utna Heroes Saga. He is a holy knight of Wellt hailing from a noble house that has served Duke Codha's family for generations. He is also the fiancé of Mel.

It is important to note that like Quan and Ethlyn from Fire Emblem: Genealogy of the Holy War, Roger dying will cause Mel to leave and vice versa. They also cannot be separated during the route splits. If they are assigned to different armies, the one assigned to Holmes will be reassigned to travel with Runan.

Roger is introduced when he is receiving orders from Codha. In his first scene, he asks Codha if the rumors about him holding Queen Liza as a prisoner are true. Codha immediately claims that they are false and begins to question Roger's loyalty to him. In the following chapter, Roger and Mel enter a battle against Runan's army in defense of Gram. As a result of their failure to stop Runan, Codha becomes increasingly doubtful of Roger's loyalty and takes Mel as a hostage to secure it. If Mel is rescued by Narsus, she can easily sway Roger to betray Codha during the liberation of Wellt's capital.

In the ending, Roger witnesses the reunion of Alfred and Sylpheeze, whom he sees as role models for himself and Mel. Before parting ways with Runan and Holmes, Roger and Mel agree to invite them to their eventual marriage.

Roger is an honorable man who suffers from a dilemma caused by the conflict between his loyalty as a knight and righteous nature. He dislikes fighting against women and tries to avoid it, but he will defend himself when they attack him first. He appears to have some discontent with his noble heritage and status as a knight due to his desperation and inability to live freely together with Mel. Both he and Mel feel discomfort whenever they are not at each other's sides.

He first appears in Map 4 as an enemy boss and must be left alive in order to recruit him later. In Map 7, he appears again as an enemy unit. To recruit him, have Mel speak to him.

Roger is a unit with quite good base stats, and average growths. When he first joins, he hits hard, accurate and relatively often. His base mastery of 9 gives him reliable and strong 1-2 in the pilum. Combining this with an excellent starting ability set, Roger is set and ready to roll. However, with frequent indoor chapters forcing him to dismount on Holmes route, he will be just okay (don't send him to Runan unless you REALLY want to miss out on Sylpheed). In order to increase his usability, it is recommended to give him the Re-Move Manual from Map 3, since he cannot learn it naturally like most other mounted units, though it isn't dead necessary. With excellent bases for his join time, Roger is recommended to use if the player needs a strong unit in the early to mid game, and will remain consistently useful thanks to lenient exp rates coupling with just workable growths, good bases, and incredibly solid skills.

Roger is a masculine given name that means "famous spear", derived from the Germanic elements hrod (meaning "fame") and ger (meaning "spear"). 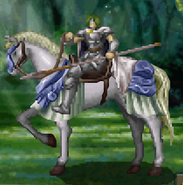 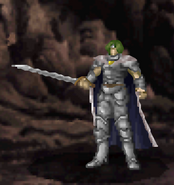