Pick, Steal, Shove
[view]
The Rogue (ローグ Rōgu) is a combat/utility physical class that is introduced in Fire Emblem: The Sacred Stones. One of the alternate promoted forms of Thief class, Rogues wield Swords or Knives as their primary weapons of choice.

In its original inception in The Sacred Stones, the Rogue class acts as one of the promoted forms of the Thief class. More oriented towards utility purposes instead of combat ones, the Rogue class is best employed for its ability to pick locks without the aid of keys or Lockpicks.

The Rogue class is absent until the onset of Radiant Dawn, where it again plays the primary role of picking locks without using keys or Lockpicks. The Rogue ( Rōgu) class is further able to promote into the Whisper class when the necessary requirements are met.

In Vestaria Saga I, the Rogue is known as the Thief Hunter. It possesses the Haggler skill which saves 25% on all shop purchases.

Rogues are much like Assassins when they are first upgraded to this form, as both classes are armed with the same weapons and have the same stat caps. Rogues are, however, inferior to Assassins in terms of HP, Skill and Constitution.

Rogues, like the other versions of the Thief class, are defined by their exceedingly high Speed. Although they usually have somewhat mediocre Defense and Resistance, they often dodge enough enemy attacks to make up for these deficiencies. Rogues are not usually used as exclusive combat units because they usually have relatively low Strength caps despite their impressive Strength growths, and their lower defensive stats also mar their combat capabilities.

Rogues are better used as utility units in The Sacred Stones, as they are the only class of units that can open Doors and Treasure Chests without the aid of Lockpicks (which Thieves and Assassins require) or keys. On the top of that, they are also able to dismantle traps/ mines in the later levels. In the end, the ability to open doors and chests is later eliminated in Radiant Dawn, as all Thieves and promoted Thieves are automatically granted the ability to operate locks without the aid of items. 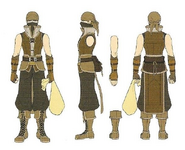 Concept artwork of the Rogue class from Radiant Dawn.

Map sprite of the Rogue class from The Sacred Stones.