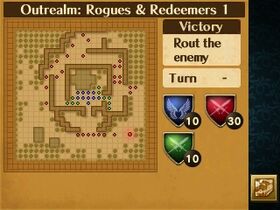 Chapter script
[view]
“Light—It protects people, guiding them towards peace. Darkness—It opposses light and enters into conflict with it. These two forces continue their never-ending war in the Outrealm. Chrom decides to lend a hand to the warriors of light to defeat the agents of darkness.”
—Opening Narration

Rogues & Redeemers 1 (Light vs. Dark (Light Side) in the Japanese version) is Xenologue 10 of Fire Emblem Awakening. This chapter takes place in the Outrealm: Gallia.

Chrom teams up with 10 protagonists from previous games (led by Ephraim) to settle the score with 30 evil or misguided foes (led by Camus). The battle map is modelled after Chapter 8: Despair and Hope of Fire Emblem: Path of Radiance. After completion of the mission, Ephraim joins as a Level 20 Great Knight.

Being in the middle of the map, all exits are sealed by the enemy. The only units that are somewhat of a threat would be Narcian, Sephiran, Jaffar, Hardin and Linus because of their abilities. All allied and enemy units have at least one Weaponbreaker skill, but your allies are mainly sword users, so any enemy with Swordbreaker will be easily able to beat them.

Heal allies whenever possible, as the enemy generally targets them first before your units depending on how strong they are.

A special conversation will trigger if the these playable units talk or battle these Champion units. Bolded names are NPCs and can be spoken to with Talk.

The map music that plays here is "Advance" from Fire Emblem: Mystery of the Emblem's soundtrack.