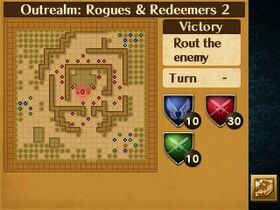 Chapter script
[view]
“Light—It protects people, guiding them towards peace. Darkness—It opposes light and enters into conflict with it. These two forces continue their never-ending war in the Outrealm. Chrom decides to lend a hand to the agents of darkness to defeat the warriors of light.”
—Opening Narration

Rogues & Redeemers 2 (Light vs. Dark (Dark Side) In the Japanese version) is Xenologue 11 of Fire Emblem Awakening. This chapter takes place in the Outrealm: Gallia.

Chrom teams up with 10 major antagonists from previous games to settle the score with 30 (mostly) good doers, led by Katarina. The enemies in this map are all at max Level and will not go down without a fight. The battle map is modeled after Chapter 8: Despair and Hope of Fire Emblem: Path of Radiance. After completion of the map, Celica joins as a Level 20 Sage.

The 10 allies on your team consist of Arvis, Zephiel, Hardin, Ashnard, Gharnef, Lyon, Black Knight, Julius, Nergal, and Raydrik. Heal the allies when needed, especially the Sorcerers and Hardin, as their Vengeance ability can either severely weaken or kill one of the enemies. Lure the enemies in the castle out slowly and carefully, as like the last Rogues & Redeemers, they all carry weaponbreaker skills. Ike should be dealt with carefully, as Aether can deal a large amount of damage if the Luna effect hits your units. Jaffar should also be dealt with carefully, as his Lethality Skill can cause an unnecessary casualty if it hits them. Sephiran should also be killed quickly due to his high Magic and his Vengeance ability can also deal massive damage onto your units or allies.

A special conversation will trigger if the these playable units talk or battle these Champion units. Bolded names are NPCs and can be spoken to with Talk.

The map music that plays here is "Eldigan the Lionheart" from Fire Emblem: Genealogy of the Holy War's soundtrack.