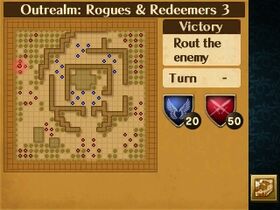 Chapter script
[view]
“Light and Darkness—these two conflicting forces join together as one to create a massive and overwhelming force... Chrom challenges the spirit talismans in a final decisive battle.”
—Opening Narration

Rogues & Redeemers 3 (Light vs. Dark (Decisive Battle) in the Japanese version) is Xenologue 12 of Fire Emblem Awakening. This chapter takes place in the Outrealm: Gallia.

In the final battle against the talismans, Chrom must defeat 50 of the mightiest warriors of light and darkness, led by Lion King Eldigan. All the enemies are at max Level. The battle map is modeled after Chapter 8: Despair and Hope of Fire Emblem: Path of Radiance. After completion of the map, Ike joins as a Level 20 Hero and the player will receive a Limit Breaker Manual.

This map is popularly used as a "Test of Strength", as it can be completed with Chrom and one other character only. It is recommend to use Robin if you expect to win this challenge.

As with the other Rogues & Redeemers challenges, all enemy units have at least one or two Weaponbreaker skills, making each one extremely dangerous in their own right. However, the majority of their other skills are similar to the ones that are fought from SpotPass, with slightly increased/capped stats and have extra weapons. The enemy gradually moves their units in ("feeding the fire"). Other sets of units will begin to move towards the player's units as more turns pass over time. All enemy units will carry at least a C+ weapon/stave, although the majority will have A weapons.

The groups that did not move on turn 1 will not attack your units unless you get next or one space away from them, and will not move units in that group unless they are attacked. This makes them easy targets for your units provided they are not next to or within one space from them if they have a weapon that has a range of 1-2).

If your units are not strong enough, clear an area where your units can beat the majority of the units without much hassle. In fact, the only threatening units are usually Sephiran, Hardin and Camus due to their high stats and skills. Jaffar should also be watched for because of his Lethality skill. You should always try to kill enemies in one turn, as numerous enemies carry Fortify and can cover a wide area of the map to restore the health of weakened units.

The Test of Strength, the "Apotheosis Warmup" Challenge

First of all, reliable healing skills are HIGHLY recommended if you want to have any chance of doing this, as well as, Galeforce/Counter, the highest support rank with Chrom possible for your other unit (normally marriage), Armsthrift + a powerful weapon, Limit Breaker (requiring you to complete this map at least once before), past this, long range weapons such as Mire, and 1-2 weapons are very useful for staying alive (conveniently something POWERFUL, e.g. Ragnell) , when all is said and done, the only things you can do past that, is find a place to limit the number of enemies that can swarm you at once (like that conveniently placed little hole next to the castle). This challenge is meant to be done with no items outside of traditional/conventional weapons. Using items defeats the purpose of the challenge, which is to test your semi-alone survival rate in an incredibly hostile environment.

A special conversation will trigger if the these playable units battle these Champion units.