Rolf is a playable character in Fire Emblem: Path of Radiance and Fire Emblem: Radiant Dawn. He is the youngest member of the Greil Mercenaries and the younger half brother of Oscar and Boyd.

The youngest of the three brothers after Oscar and Boyd, Rolf's birth mother left him when he was a infant, abandoning her sons and their bedridden father for another love interest, leaving Oscar to take care of the family. Though he traveled with the mercenaries, his tasks were mostly chores such as helping Mist with cooking and cleaning. Because of this, he had no combat experience prior to when Greil died.

He was first taught how to use a bow by Shinon, so that, like Mist, he could be of some use to the group rather than staying behind every time the company went to work. Shinon told Rolf during his training never to tell anyone who taught him, and he remained faithful to that promise, although his eldest brother, Oscar, could detect the secret, but never told anyone, either, respecting Rolf's oath.

When the group encounters his birth mother by chance in Radiant Dawn, Rolf is given the opportunity to live with his mother, and she begs for him to return. He chooses to stay with his brothers, however, saying that she is a stranger to him, considering the fact that she abandoned him, his brothers and his sickly father when he was a baby just to be with another man, and that he would prefer staying in the company of what he considers his true family: Oscar, Boyd, and the rest of the Greil Mercenaries.

He can perform a Triangle Attack with his brothers under certain conditions, being that Oscar and Boyd are upgraded classes with the ability to use bows. This is a default setting in Radiant Dawn (keep in mind that Oscar must be a Silver Knight, and Boyd must be equipped with a crossbow of some kind), but optional in Path of Radiance.

Rolf joins underleveled, in chapter 9, with base stats that would barely be acceptable several chapters earlier. Being bow-locked with these stats would be a struggle on its own, but it's compounded on by the fact that Rolf joins with E bows. His growth rates are decent, but they aren't anything spectacular and certainly aren't enough to salvage his poor bases. Even with favoritism, he'll take several chapters to catch up to the rest of your team. On top of all of this, he joins at around the same time as Marcia and Kieran, two of the best units in the game, meaning he'll need to steal valuable experience from them to get anywhere. Even if you want to recruit Shinon, Rolf doesn't need any experience to be kept safe in chapter 18. The only potential threats are the siege tomes used on that map, but proper positioning and use of the barrier staff can make them a non-issue.

The other available choice for Sniper is Shinon. While neither are particularly worth using, Shinon is still arguably better due to joining with base B in bows, allowing him to wield the Brave Bow at base. His niche of being the earliest joining bow user is relevant only once, in chapter 12, but even then he's held back by the fact that effective weaponry only multiplies Mt by 2 in Path of Radiance, rather than the series's usual x3 multiplier. He will also be easily doubled if the player has not been investing in him up to this point. Once Astrid joins in the next chapter, any niche advantage that bows might have given him is gone. If for some reason 2 bow users are desired for the same map, he might see some use until Boyd promotes.

In Radiant Dawn, Shinon joins at the same time as Rolf and at a higher level, but Shinon and Rolf both compete in different stats. Rolf has higher HP, luck, and higher strength, but lower Defenses, Speed, and much less skill. Compared to Leonardo, Rolf has higher HP, strength, and speed, but much less resistance, luck, and skill. It is advised to take at least one Marksman with you to the final chapter so you can use the powerful Double Bow, so who you end up using as your Marksman is completely preference. Of the three, Rolf has by far the highest HP and Strength and by far the lowest Skill and the middle ground for Luck and Speed.

During Part 3, Rolf's biggest flaw is that with BEXP abuse, Shinon will cap Strength with relative ease, as well as defense, HP, Skill, and Speed. Rolf will almost certainly fail to cap Defense, but he can cap Skill and Speed as a Sniper. Rolf takes many levels to get up to speed, as to cap HP and Strength. His Skill and Speed will develop decently well, and he will one-round most enemies if he gets enough in these stats. He's practically guaranteed to cap Strength as both a Sniper and a Marksman, just watch out for his defenses, but his HP and decent avoid can help him sponge some attacks.

Tricky Archer
A member of the Greil Mercenaries and the younger brother of Oscar and Boyd. Joining in on the harvest festivities in a ghostly getup. Appears in Fire Emblem: Path of Radiance.

Rolf is illustrated in the trading card game Fire Emblem Cipher with the following cards: 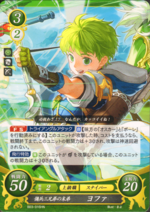 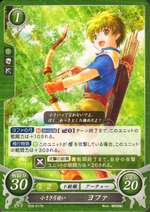 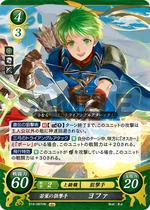 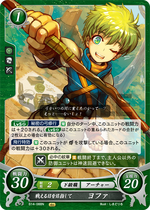 Rolf is a real name and has its own meaning, but it is an alteration of "Rudolf", which means 'fame' and 'wolf' in its Germanic roots.