Chapter 2: The Village of Iz

Clifford Chapin
[view]
“If we don't do something, we'll always have to live in fear of Lifis. I just can't take it any more!”
—Ronan

Ronan is a playable character in Fire Emblem: Thracia 776. A sixteen-year-old hunter from the village of Iz, he joins the Freeblades of Fiana in an effort to protect his village from raids by the Lifis Pirates.

He can be recruited by any character who visits the northern village, in Chapter 2, but before it is destroyed by the invading pirates.

Ronan first appears in Chapter 2, where the village of Iz is besieged by Lifis' band of bandits. As the Freeblades of Fiana fights through the invasion, any one of them can visit the uppermost house on the map to meet Ronan. Against his mother's protests, he takes up a bow and joins Leif's effort to defeat the bandits.

Ronan, along with the rest of the Freeblades of Fiana, is later separated from Leif and Eyvel in Chapter 3, as the prince is captured by Raydrik. Along with Osian and Halvan, Ronan later embarks on a quest to Munster, but is captured by Hannibal's patrolling troops when he and his companions are found roaming around Munster Castle. The trio regains their freedom at the end of Chapter 7 on Leif's behest.

Ronan then goes on to continue supporting Leif in his cause to liberate Northern Thracia from the Grannvale Empire. He will return home to his mother in Iz thereafter, where he gets married and lives a happy life.

Ronan does not get much characterisation, but through what little screen-time he gets, it is clear that he is a courageous youth with a strong will and resolve. This can be seen in Chapter 2, where, despite being inexperienced in combat, he is willing to take up arms to protect his home from invading bandits.

Ronan is an extremely unusual unit, with growths more befitting that of a Mage than an archer. He has excellent Skill, Speed, and a strangely high Magic growth. Unfortunately, his high Magic is mostly pointless except for tanking mages (since Magic also acts as Resistance in Thracia). Ronan will struggle to have enough Strength to reliably defeat enemies and will also have poor HP and Defense. Combined with his lack of 1 range, he will remain a subpar combat unit for most of the game.

Ronan's most useful aspect is his excellent Movement; his base Move is 7, which allows him to immediately travel around quickly from the moment he joins. He also has three Movement stars, giving him a 15% chance for Re-action to occur. This makes him useful in indoor maps which require good movement. His support from Leif also helps him perform better in battle, but only while he is within Leif's range.

Despite his bad combat, Ronan, like most units in Thracia, can have his stats improved by equipping him with several Crusader Scrolls. Otherwise, Ronan can still be used to weaken enemies for other characters to easily kill or capture, especially at the beginning of the game. Should the player decide to use him as a longterm combat unit, the main goal should be to get him to B bows as it lets him use the strong and reliable Brave Bow, which makes up for his poor strength.

Villager of Iz
A hunter from the village Iz. Has a strong sense for right and wrong, and a stronger distaste for pirates. Appears in Fire Emblem: Thracia 776.

“Forgive me, Lord Leif. I wasn't strong enough to help...”
—Ronan's quote at the end of Chapter 7

Ronan's name is an Irish Gaelic made of the word ron, meaning 'oath' or 'seal', along with the suffix making 'little oath' or 'little seal'.

"Ronan went back to Iz, where his mother awaited his return. He then resumed his ordinary life of hunting. Some time afterward, he quietly married, and lived happily for the rest of his days."

Ronan is illustrated in the trading card game with the following cards: 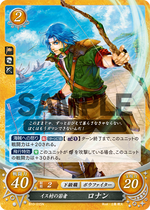