Chapter 19: The Last Decisive Battle (Mystery of the Emblem)

Paladin (Mystery of the Emblem)

Josey Montana McCoy
[view]
“I am Roshea of the Aurelis Knights. I don’t want to fight, but I can’t betray my companions. Please forgive me...”
—Roshea's boss quote in FE3.

Roshea is a recurring character in the Archanea series.

Roshea is a member of Hardin's army who joined Marth in his first campaign against Medeus and later joined the Coyote's Men.

It is said prior to the start of the game, he was a slave but was freed by Hardin. He is one of the two knights Hardin chose to bring with him in Fire Emblem: Archanea Saga, though other than a unique death quote he does not have any new dialogue.

Unlike Wolf, Sedgar, and Vyland, Roshea was doubtful whether Hardin was himself or not after his fall to madness in the second game, but sticks with his friends. Afterwards, however, Roshea once again joins Marth in trying to wake Hardin up, though he fails. In the end, he settled in a town and often offers a prayer for Hardin's soul.

According to the Takayashiki Hideo's Mystery of the Emblem novel adaptation, Roshea is 18 years old. [1]

Roshea can be recruited by visiting the village to the southeast in chapter 19 in New mystery of the Emblem. He can then be used to recruit Vyland who will appear (as an enemy) from southeast at the end of 5th turn.

Roshea tends to be regarded as a filler unit in his first appearance, largely owing to both his mediocre statline and heavy competition from the large number of other cavaliers and paladins. A particular sticking point is his Speed, with a pathetic 10% growth practically demanding an early promotion and a Speed Ring to hope at resolving. That said, cavalier in itself is a good enough class to make him somewhat redeemable, due to its high Movement and access to two good weapon types. Roshea boasts a decent Weapon Level, giving him the ability to wield a Silver Lance at base, though he will need good luck with a 30% growth or a promotion to wield a Silver Sword. Generally, he is more competent than he looks, but he will take a lot of work to stand out beyond that.

Note: Relevant to Book 1 only.

Roshea has seen a fairly substantial buff in Book 1, in the form of very considerable boosts to his Speed and Defense growths, giving him a small niche as the sturdiest of the various cavaliers (though they remain generally superior to him) and mostly fixing his Speed problem. He is hurt by the need to dismount, but he can slot onto a team very effectively, and needs far less investment to fill in competently.

On Book 2, Roshea is a very different unit, and a considerably worse one. This owes to him joining extremely late, in a class that has only grown more saturated since Book 1, with an army that has been leveling with Shards for the whole game. Consequently, Roshea's very mediocre statline gives him very little reason to be used at a point when many characters in the army are likely to be capping out. Midia is a further point against him due to joining one chapter later with far better stats. Worst of all, most of the remaining maps are primarily or entirely indoors, meaning the main selling point point to Roshea's class no longer applies for nearly all of his availability. Roshea serves very little purpose in the army, and can be ignored without missing much at all.

Roshea's main strong point in Shadow Dragon is his lance rank when combined with a base Speed of 7. This prevents him from being doubled by most average-speed enemy types in the early game, and allows him to use javelins to chip enemies at range while having the potential to use Ridersbane eventually. Unfortunately, this niche is generally filled better by Hardin and Abel, making Roshea more or less filler. Tragically, he retains his 10% Speed growth from Shadow Dragon and the Blade of Light, meaning that Roshea will essentially never double anything faster than a General, and will likely be doubled in the mid-to-late game. Longterm use of Roshea will practically require at least one Speedwing.

Roshea is one of the worst units in New Mystery. His base stats are scarcely better than Sirius, a character seven levels lower who joined in Chapter 4, and while his growths look tolerable, they are not nearly enough to save him. Roshea's stats are so disastrously poor that on Lunatic, even when reclassed into Swordmaster, he is comfortably doubled by most enemies in Chapter 20, and when reclassed into General, he is comfortably one-rounded. Even his weapon ranks are poor; he cannot wield Mercurius or Gradivus at base regardless of his class, limiting him to silver weaponry, and his lack of bow or tome rank leaves him restricted to javelins and Levin Swords for ranged attacks, meaning he struggles to chip enemies down. Roshea offers almost nothing that cannot be provided by other units at his join time, and requires a great deal of work to even manage a mediocre performance.

Coyote's Fatihful
Member of the Coyote's Men of Aurelis. After the War of Shadows, he retired from the army but eventually returned to the field. Appears in Fire Emblem: Mystery of the Emblem.

He retired from the army, but later returned and became a Paladin of Aurelis.

After the war he went to Aurelis, perhaps to offer prayers for Hardin…

Roshea left the army, but later returned and became an Aurelian paladin. Records show he resided in Altea for a time.

"Roshea left for Aurelis after the war. Accounts are unclear, but some say he was present at Hardin's funeral..."

“Prince Marth, I am Roshea of the Aurelis Knights. I have King Aurelis’s permission to come here, and am awaiting your highness’ orders.I am truly sorry for the battle at the pass. To apologise to you, I will join and fight alongside your army. Marth, please watch over me!”
—Recruitment conversation with Marth in Mystery of the Emblem: Book 2
“Prince Marth... It is I, Roshea of the Coyote's Men. I received King Aurelis's pardon and have been waiting for you. I am truly sorry for the battle of the pass. I realize that an apology means little, so I will now fight under your banner. But... the other Coyote's Men members have all sided with the Archanean army. I wonder if I could persuade them. Vyland, at the least... Vyland might listen to what I have to say.”
—Recruitment conversation with Marth in New Mystery of the Emblem

“Coyote...”
—Roshea's death quote in New Mystery of the Emblem ~Hikari to Kage no Eiyū~ before recruitment

“Ugh... That was... too much for me... I must withdraw for now...”
—Roshea's retreat quote in New Mystery of the Emblem's casual mode

Roshea is illustrated in the trading card game Fire Emblem Cipher with the following cards: 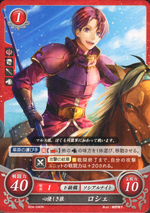