Ross is a playable character in Fire Emblem: The Sacred Stones. He is a young villager from Ide, and son of the former warrior Garcia, who left the army in order to raise him.

Ross is a wild and impetuous youth, who seeks to emulate his father by becoming a warrior. In his support conversations, he is shown to be serious about his oaths.

Ross lost his mother when he was very young; in a support conversation with Lute, it is revealed that she knew some degree of magic, and Ross believes that he had a chance at learning magic, for Lute states that you have to be born with magic in order to use it. Garcia retired from the army to raise Ross; as a result, they are extremely close, and Ross adores his father and seeks to become as strong as he is.

Because of his close relationship with his father, Ross has a strong sense of family and often seeks out people to become close with that are similar in age to him. In his supports with the other trainee units, Ewan and Amelia, he offers to be their brother when he finds out that they lost their parents.

*25% in the Japanese version

Ross is one of the three Trainee units that joins the player's party, and he is the earliest of them to do so. He takes a lot of investment to catch up to everyone else and has eventual long term payoff since he can promote twice (once for free and the second with a promotional seal). Though a poor combatant at first, Ross's Hatchet makes it reasonably easy for him to pick off kills on weakened enemies and gain levels, and his fairly early join time makes it plausible for him to catch up to the rest of your units without too much favoritism. Despite his rapid early EXP gain and extra levels to grow, Ross's growths are mediocre. This can make Ross something of an unreliable pick, even when raised up, but he should overall be comparable or superior to his father in most respects once fully raised. His Speed in particular tends to be a bit of a sticking point, and he may need a Speedwings to start doubling reliably.

Upon reaching level 10, Ross has the choice between becoming a Fighter, a Pirate, or a "Super Journeyman." The Super Journeyman path is generally seen as more of a novelty than a truly viable path, as it has no unique advantages and low stat gains, along with retaining his average Constitution. Fighter and Pirate are broadly very similar, with the exception that Pirate can walk on water, making it somewhat better in the short term.

When fully promoted, Ross may become a Hero as a Fighter, a Berserker as a Pirate, or a Warrior as either. Warrior can usually be ignored, as bow use is less relevant when Ross doesn't tend to struggle with killing fliers upon promotion and he has the Hand Axe for ranged combat, and it fails to boost Ross's Speed. Berserker retains the waterwalking of Pirate, and adds a 15% critical boost and further terrain advantages, making it generally the superior choice if Ross can hit reliably. On the other hand, Hero provides access to swords, which gives Ross both weapon triangle control and a more accurate option, however he becomes vulnerable to Swordslayer in the process.

His Father's Son
Son of Garcia, a warrior of Renais. A very straightforward and honest lad raised without a mother. He greatly admires his father's skill. Appears in Fire Emblem: The Sacred Stones.

Ross: Hey, listen! My village is being attacked by bandits. My name's Ross. Come on! You have to help me wipe those thugs out!
Eirika: All right, just... Just take a deep breath and calm down, Ross. Leave the villages to us. We'll drive off the bandits. Seth, take the boy somewhere safe.
Ross: No! Wait! I'm going to fight, too!
Eirika: But...
Ross: My father is out there all alone, fighting those bandits. I've got to get back to him as quickly as possible! I'm the son of the great Garcia! As long as I have my axe, no bandit will ever defeat me!
Eirika: All right, I can see you're not going to be swayed... But you must promise you will stay close to us.

“I... am a warrior to the very end.”
—Ross's death quote in The Sacred Stones.

“Watch with pride, Father! I'll show you who's the strongest!”
—Final Chapter Quote in The Sacred Stones

Ross, His Father's Son (受け継がれし豪腕 Uketsuga reshi Gō ude)
"He returned to Ide, village of his youth, and helped rebuild it after the bandit attack that brought it to ruin. Years later, he set out on his own to perfect his fighting skill and hone both body and spirit."

A Support with Garcia
"Ross and Garcia returned to their village, where they toiled together to rebuild their village. Ross grew to become a greater warrior than even his father. When he himself had a son, that child continued his family's legacy."

A Support with Amelia
"Amelia traveled to Ross's hometown, where she decided to remain. Over time, the two fell in love and were wed. Years later they had a son who grew into a warrior. As he grew in skill and strength, he surpassed even his father."

Ross is illustrated in the trading card game Fire Emblem Cipher with the following cards: 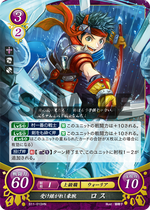 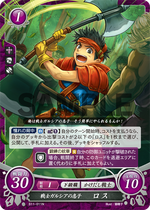 Ross's name may come from the Scottish Gaelic word "ros", meaning promontory, which ultimately comes from Old Irish. It also refers to the region of Ross in northern Scotland as well as Clan Ross, who originate from there.

Another possible origin of the name comes from the German word "Ross", meaning horse, originating from the Old High German "ros".