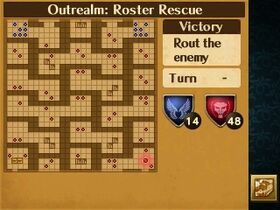 Rout the enemy
Defeat all 7 Revenants (To recruit Palla)

Palla from the Outrealm (No Revenants escaped)

Roster Rescue (Labyrinth Pursuit in the Japanese version) is Xenologue 21 of Fire Emblem Awakening. This chapter takes place in the Outrealms.

Due to the nature of the Ruins, at the end of the enemy's turn they will either crumble themselves or restore themselves, the latter making it impossible to pass until they collapse again. All the ruins are passable like in Nah's Paralogue, so you do not have to keep waiting for the ruins to collapse to pass over. However, if you want to obtain Palla, killing all seven Revenants are mandatory. Using Mire is required in order to kill some, due to the other Risen that will interfere with your attempts to kill them.

The Risen in this DLC are somewhat strong, having a rating around 200-250. It should be important to note each Risen unit and what they have:

Your team is split up into two groups in the northwest and northeast corners. The Revenants will escape from the north central, southwest or southeast areas of the map. If you want Palla, kill the Revenant in the middle as it is next to an escape point and if the player is not noticing, it will escape and prevent the player from recruiting Palla. Try to clear up enemies as quickly as you can; however, you must be careful of the staircases, as like most battles in Awakening, these are same-turn reinforcements which can cause casualties if the player is being careless.

Eventually, the last two Revenants will appear from the south central staircases. It is possible to block the exit points, though you will need to clear the Risen out quickly to ensure that they are not killed. The enemy commander is aggressive, so a strong unit should bait him out.

There are two chests in the southwest corner; looting these are optional.

(Reinforcements might not appear if your units havent advanced far enough down yet, which is not advices because this will not allow you to kill all 7 Revenants)
All enemies spawn at the beginning of the enemy turn.

“Your precious secrets have been stolen! Chrom and his team must pursue the perpetrators to retrieve the information.”
—Website Opening Narration
“Hunt down the zombies before they escape the labyrinth! Can you catch them all?”
—North America eShop Opening Narration