The Royal Sword (王家の剣, Ōke no Tsurugi lit. Sword of the Royal Family) is a special Sword that hails exclusively from Fire Emblem Gaiden and its remake, Fire Emblem Echoes: Shadows of Valentia.

This sword was a gift sent by the Kingdom of Rigel to Zofia as a means to strengthen the bilateral ties forged between both nations. This powerful sword was not meant to be wielded by everyone, and so to ensure this, a special enchantment was placed on the sword. Those who do not bear the blood of royalty will find that the blade is too heavy to wield, let alone even pick it off of the ground. To those who are worthy, the blade is incredibly light and powerful. After the fall of the Zofian royal family, General Desaix raided the castle and took the sword for himself. However, being unworthy to wield the blade, he instead locked it away.

After Desaix is killed by Alm and the Deliverance, Alm and Tobin find the Royal Sword in Desaix's Fortress. Tobin attempts to pick it up, but finds that it is too heavy for him to even lift it. Lukas then proceeds to explain the myth behind the sword to Alm. Alm, who effortlessly picks it up, believes that Tobin was jesting, though he vehemently denies it. Lukas is shocked by this fact and question the implications of this, but Alm dismisses it as an exaggeration of the myth. Lukas agrees to the possibility, but determines that Alm is the rightful wielder of the blade regardless.

The Royal Sword was lightly alluded to in Awakening as Alm's Blade. 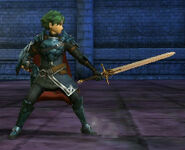 Alm wielding the Royal Sword in Shadows of Valentia.