Not to be confused with Rutger.

Trickster
[view]
“Haaalp! I am Chrom, ruler of Ylisse! I'm being hunted by brigands! If you help me, I'll see to it that you're handsomely rewarded!”
—Ruger's impersonation of Chrom

Ruger (Luger in the Japanese version) is an enemy boss character from Fire Emblem Awakening.

Ruger was a conman who impersonated Chrom to terrorize a local village, impersonating the Shepherds with his own band of men. One day, he met Cynthia, and he managed to convince her that he was actually Chrom.

During Paralogue 9, the real Chrom arrives, and sets out to find Ruger after being informed by Frederick that a band of people impersonating the Shepherds were the reason why the town was afraid of him. Noticing the real Chrom, he sends his men to battle them, and with a local band of mercenaries by the woodline, attempts to convince as many as he can to help him. In the ensuing battle, he either flees, never to be seen again, or is killed. 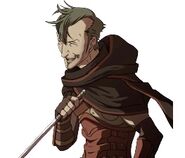 Ruger convincing an mercenary to join his side