Ruin (ルイン) is a Dark magic tome introduced in Fire Emblem Awakening. It can be seen as the Dark Magical counterpart to the Killer weapon series, although Ruin provides an even more potent critical boost. 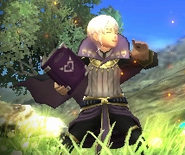 Henry wielding the tome of Ruin in Awakening.

In-game model of the Ruin tome from Heroes.