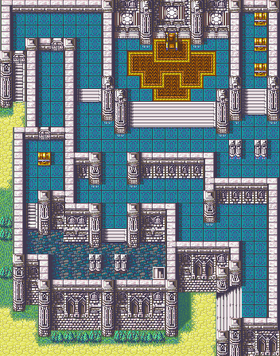 Chapter script
[view]
“The capital of Renais. After the twins' absence, seeing their home ruined by war brings them terrible grief. Orson, a former Knight of Renais, had been assigned to guard Castle Renais. However, he switched allegiances, betraying his oaths of loyalty to his homeland. Ephraim/Eirika marks his/her homecoming by vowing to see Renais healed.”
—Opening Narration

Ruled by Madness is Chapter 16 of Fire Emblem: The Sacred Stones. At the end of the chapter, Eirika and Ephraim can promote to Master/Great Lords at the player's choosing. If you choose not to promote them, they will receive the Lunar and Solar Braces, respectively, which can be used in the item menu to promote. They will also acquire Sieglinde and Siegmund, the Legendary Twins of Renais.

However, item drops do not vary. In both routes, a Hero (in Eirika's route) or a Warrior (Ephraim's route) will drop a Hero Crest, and a Sage will drop a Purge.

Your starting point also changes depending on the routes. In Ephraim's route, you start at the southwestern part of the map. Eirika's starts at the southeast, near the stairs.