Dracoknight
[view]
“Take this! Knight Killer!! I’ll show you the horrors of the Macedonian dragon knights!”
—Rumel's battle quote in the original Mystery of the Emblem.

Rumel is a Dracoknight boss in Book 2 of Fire Emblem: Mystery of the Emblem and its remake. He is a member under Rucke's rebellion army and assisted him by overthrowing Princess Minerva.

When Minerva had disbanded the oppressive generals of Macedon and attempted to reform the military, Rumel and Rucke rebelled against her and formed a rebellion, with Rucke as the leader, and decided launch an attack towards Minerva. With Minerva not being prepared for the situation, the attack was successful and the Minerva was captured by the rebels. Afterwards, Rucke dispatched Rumel along with powerful Dracoknights to guard the country's bordering forests. When the Marth's army marched into Macedon to reclaim Princess Minerva, they were encountered by Rumel and his bordering patrols. Rumel engages in a battle against the Altean army but is eventually defeated in battle, leaving Rucke to take care of the rest.

Rumel can optionally be killed in the chapter he appears in (not counting Normal mode and below in the DS remake). Should he live, his fate is unknown and is not mentioned afterwards.

In the original, Rumel wields a Ridersbane (known as Knight Killer in the original) which makes him a terror at this early point in the game since his weapon is effective towards your Cavaliers and your Paladin, Arran. He is also a mobile boss in this chapter, meaning he is capable on moving out of his square, so one should keep their mounted units out of his range.

In the DS remake on Normal mode, he is changed into a stationary boss. His Ridersbane was also removed on all difficulties and he is equipped with Axes, making it much easier for beginners to not lose any of their mounted units early at this point of the game.

On Hard mode and beyond, Rumel retains his mobility, and he is equipped with a Silver Axe and a Steel Axe, meaning the player can ignore him and seize the Chapter once he has moved off his square. However, one should kill him for the experience and the droppable weapon.

Since Rumel is a flying unit, he is vulnerable to Bows. Since you will have at least 3 bow users (Gordin, Ryan, and Warren if is recruited) (or 4 if Kris started off as an Archer in the remake,) from the point you encounter him, it should be really simple to take Rumel out once he is lured, even on higher difficulties.

“General Rucke, I leave the rest to you...”
—Rumel's death quote in the original Mystery of the Emblem. 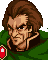