Rumors of a Reaper

Rumors of a Reaper 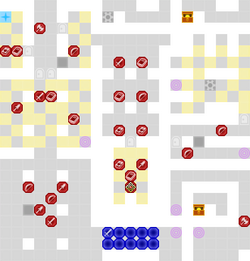 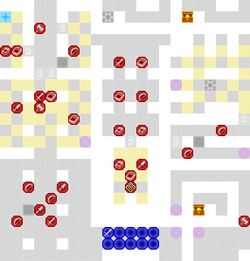 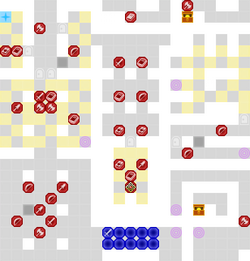 Defeat the Death Knight or Rout all other enemies

Chapter script
[view]
“As I believe you are already aware, Seteth's younger sister, Flayn, has gone missing. At present, all we know for certain is that she has not left Garreg Mach. There are rumors of someone prowling the streets and attacking innocents, night after night... Professor. Your mission for this month is to help find Flayn.”
—Lady Rhea

Rumors of a Reaper is the sixth chapter of Fire Emblem: Three Houses.

Rumors begin spreading across the academy of a reaper appearing at night, kidnapping students. While the rumor seemed unfounded, the academy is put into high alert when Flayn is a victim. Rhea assigns Byleth to investigate and save Flayn.

By the end of the month, Byleth's investigation leads them to Jeritza's room where they find Manuela wounded and unconscious. Edelgard/Dimitri/Claude takes her to the infirmary while Byleth and their other students eventually find an underground passage where they find Flayn and the unconscious body of a female student held captured by the Death Knight. Byleth and the Students are able to repel the Death Knights forces and the Flame Emperor forces him to retreat, allowing Byleth to recover Flayn.

Flayn is okay, but Seteth expresses worry for her safety after the incident. While he suggests that the two go into hiding to prevent others from kidnapping her again for her unique crest, Flayn adamantly declines as they would at most delay the inevitable and that the two would be far safer at the academy where they can be protected by the Knights and Byleth's students. Seteth, after months of doubt, finally accepts Byleth's capacity as a warrior and a professor and agrees to allow Flayn to join their class as a means to protect her.

Edelgard/Dimitri/Claude are unavailable to be used in this chapter.

The battle must be completed within 25 turns.

*Note* The player must visit the Monastery on the very first free day of the month and complete the mandatory quest of the month. When completed, the player can choose to start the month's battle immediately, though this will waste all free days and tutoring for the month if one chooses.

This battle is another limited turn map, giving the player has 25 turns to complete it. There are two possible victory conditions, either defeat the Death Knight or rout all other enemies. Also, Edelgard/Dimitri/Claude is completely unavailable for this battle.

Like the previous encounter with the Death Knight in Chapter 4, he is a powerful, but immobile enemy, thus unless you purposely place your units into his range or initiate on him, he will not bother your units. This is the second opportunity to obtain a Dark Seal, either by defeating him or having a character with Steal swipe it from him. The latter is a safer option as unless significant time has been poured into your units, most if not all will be unlikely to survive a round of combat against him at the current level spread of your units. Note that you don't need to actually open the final door if you don't have a door key if you just want to kill the other enemies in the Death Knight's room; you should be able to attract the attention of all the enemies inside by standing outside and throwing Curved Shots into the room with an archer.

In Maddening mode, the Death Knight moves upon opening the door, as do the units located in that room. A possible safe method to enter the room would be having a Cavalier or Pegasus Knight open the door, using the remaining movement to get out of the attack range of the Death Knight.

If you'd like to defeat the Death Knight, the Golden Deer generally have the easiest time, as Lysithea can learn Dark Spikes for cavalry-effective damage if she can reach B Reason. On Maddening, it can be unsafe for practically any unit to engage. Two Maddening strategies: training Dedue or Bernadetta to C+ in Lances lets them easily kill the Death Knight in one hit with the combat art Vengeance. By getting them to very low HP - easily set up with an enemy archer's Poison Strike damage, which will never finish a unit off, only leaving them at 1 HP - they can easily hit the Death Knight for 60+ damage. Do note, however, that you might want to save multiple Divine Pulses, as it is quite hard to hit the Death Knight unless you are positioned to stack Link Attack bonuses. The second strategy, only possible in New Game+: on NG+ each house has early access to a Battalion with the Impregnable Wall gambit (e.g. Empire Armored Co. or Alliance Wyvern Company), with which the Death Knight can be lured out of his chamber to be surrounded and softened up by Gambits until he can be safely finished off by Dark Spikes or Knightkneeler. If you lack the power or accuracy to safely defeat him you can also deplete the Scythe of Sariel's weapon durability with this Gambit, thanks to the Death Knight's chamber easily allowing 3 units to set up in a line. Equip weapons heavy enough to be doubled, then attack him 3 times, and he will attack your Walled units during enemy phase. This depletes 8 uses of the Scythe per turn, so with 4 charges of Impregnable Wall, you should be able to get rid of all 30 durability on the Scythe, along with inflicting some minor chip damage back. Do not forget the chapter must be completed in 25 turns, however.

It's possible to quickly complete this chapter by using Warp to send a character into the Death Knight's chamber from the start, or shooting him from the space below him using a Killer Bow and a Combat Art that can reach four spaces away. 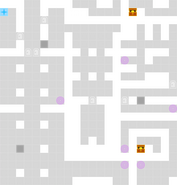 Pulling the northern lever disables all of the stat-boosting tiles. 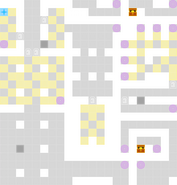 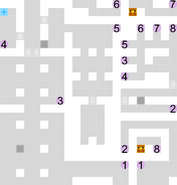