“I never forgot, Enteh. Although I didn't know that you were the princess until Lady Clarice hinted at it... I grew up without a mother or siblings, so you were the first girl I ever really knew. We were only together for a month, Enteh, but while you were here, you were a part of our family. And then you were gone, just like that. You were taken away to the palace, and you never came back. I felt like I'd lost everything. I cursed you for abandoning me. I didn't know about the hardships you'd had to endure all those years... I resolved to try and forget about you. It was too much for a child to bear alone... Enteh...”
—Runan, in a conversation with Enteh

Runan (リュナン Ryunan), full name Runan Selius (リュナン・セリオス Ryunan Seriosu), is one of the two protagonists of TearRing Saga: Utna Heroes Saga. He is the seventeen-year-old son of Duke Glamdr of Razelia. He is known as the Hero of Granada because he fought to defend it from the Zoa Empire for one year. He is also the best friend of Holmes, who sees him as a younger brother.

As a child, Runan was introduced to Enteh by his father and became a close friend to her. During their short time together, Enteh began crying out of fear that she would eventually transform into a dragon and kill many people, and Runan comforted her by making a promise to protect her. However, she later vanished for reasons unknown to him, causing him to be unable to fulfill his promise.

When the reborn Zoa Empire invades Reeve, Runan and Holmes fight in defense of Granada for one year. Once their efforts are proven to be useless, they escape to the Kingdom of Wellt, where they part ways. While Holmes travels around the world as an adventurer, Runan seeks out assistance from Wellt in hopes of eventually retaking Razelia. In the first chapter of the game, he saves Sasha from Codha's pursuing army and escorts her to Verge to seek aid from Merlon. During a battle against the Taurus Bandits, he reunites with Enteh, who immediately recognizes him, but decides not to reveal her identity.

Eventually, Runan liberates the capital of Wellt and thereafter travels to Marl, where he meets with Richard and Tia. Afterwards, he begins fighting to liberate Razelia from the Zoa Empire.

After defeating the Canaanite forces headed by Prince Julius and liberating Reeve, Runan discovers Enteh's true identity as Princess Maeve and the friend from his past. He becomes angry towards Enteh for both refusing to reveal herself earlier and her desire to marry for the benefit of her kingdom. As a result, the two of them part ways, and Runan travels to Nolzeria to meet with Sennet. However, Enteh secretly follows him and transforms into Muse to protect him when he is attacked by a controlled Rakis. Afterwards, he and Enteh separate once again, as she embarks on a solo mission to rescue Neyfa.

Once Runan discovers that Enteh has been abducted by the Gerxel Church, he travels to the Temple of Water, where he unseals the ☆Seiken Reeve using the Ring of Reeve. Despite his best efforts to rescue Enteh, she is ultimately sacrificed to Gerxel alongside Katri and Neyfa. After Gwenchaos's transformation into Gerxel, Runan teams up with Holmes, Sennet, and Tia to slay him with a combined attack. After Enteh is resurrected by Miradona, Runan confesses his love for her.

In the ending, Runan refuses to allow Tatus to take Enteh's hand in marriage and successfully stops him with the support of his allies. Later, he boards the Sea Lion to travel around the world alongside Holmes, Enteh, Katri, and Shigen.

Runan has a formal, calm, and serious disposition. He suppresses his emotions because he thinks that he must do so in order to win the war. However, they slip out in situations involving Enteh, such as whenever she is in danger. He initially does not concern himself with women and romance, instead focusing solely on the war. Over the course of the story, he learns to accept that deaths will inevitably happen in a war, although he does not seem to like having to kill others. He is also taught to never be concerned with the personal problems of his enemies and instead simply kill them for being on the opposite side of the conflict. Runan credits everything that he learns from experience to his adviser, Eugen.

Automatically from the start of Map 1.

Runan is the first lord in the game and thus he is required to be fielded in every chapter in his route. He usually has average offense, although his Rapier is quite useful against armours and cavaliers in the early stages of the game. His growths are also well-balanced and strong, but his bases will make sure he remains average at best. After his promotion, he should become far more competent, and will make great use of magic swords thanks to +4 magic. He does not need to be particularly strong for endgame, but there's really no reason to not use him.

A young Runan with Enteh.

Runan's portrait as a Knight Lord

Runan's portrait as a Lord.

Runan's unused portrait as a Knight Lord with blue hair.

Runan's unused portrait as a Lord with blue hair. 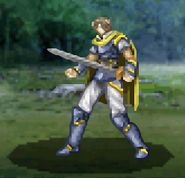