Not to be confused with Ruger.

Brian Kimmett
[view]
“......That day... I learned that it is the strong who consume the weak in nature. That is true anywhere, be it Sacae...or Bern!”
—Rutger talking to Dayan in a support conversation.

Rutger is a playable Myrmidon from Fire Emblem: The Binding Blade.

He appears as a Sticker known as Rutoga in Super Smash Bros. Brawl and makes a very brief cameo in chapter 6 and 17 of the Hasha no Tsurugi manga.

A swordsman from Bulgar in Sacae, Rutger looks more like someone from Bern than he does from Sacae, which is a very rare occurrence. When Bern invaded Sacae, Rutger was the only one spared because Bern's forces mistook Rutger for one of them. Since then, he went on a journey to avenge his family.

Employed under Laus, Rutger frees Clarine after she has been kidnapped by Marquess Erik. He then comes out as an opponent, until he saw Roy’s party fighting Bern and joined the party right after.

After the war, he disappeared, supposedly no longer seeking revenge.

Distant and aloof to the point of preferring to be alone, Rutger is empathetic to others, as he did rescue Clarine and even apologized to her when he accidentally made her cry in their B-support, and tries to encourage Fir to be herself rather than emulating him.

Originally he simply lived with the aim to enact revenge upon Bern, but while fighting with Roy’s party, he begins to hesitate with living solely for that purpose, with Dayan and Karel serving as especially large influences on him.

In Hard Mode, Rutger can prove to be a very reliable unit. His bases are higher than Dieck's and his offense is comparable to Marcus' early in the game. He is one of the few units to have enough accuracy to reliably hit some of the game's bosses. With a Killing Edge he is easily the best boss killer in the game. He will only become stronger upon promotion, where he gains +30 critical. He has enough speed to double practically every enemy in the game but Gel. While his strength growth is not spectacular, his base of 9 (in Hard mode), along with +2 strength granted upon promotion, should leave him with a sufficient amount of strength. He also has fairly high HP and usable defense. His only real flaws are his lack of ranged options and average movement.

Rutger's support triangle with Clarine and Dieck boosts his already high critical rate to extreme levels. With a Wo Dao and A/B support with them, Rutger can reach over 100 critical. This support also boosts his already good avoid. It should be noted that Dieck's supports with both Rutger and Clarine build very slowly. If the player is patient enough, this support triangle can make Rutger a highly lethal unit. Otherwise, Clarine supports with Rutger easily enough and that alone yields nice Avoid and Crit bonunes that will generally suffice.

Lone Swordsman
A swordsman from Bulgar, a trading city in Sacae. He swore vengeance against Bern after they killed his people, leaving only him alive.

Rutger - Surly Myrmidon (孤高の剣士 Kokō no kenshi, Lone Swordsman)
"Rutger disappeared without a trace after the war. He was reportedly sighted in various places around the continent, but his name only appears in the records of the war."

Rutger is illustrated in the trading card game Fire Emblem Cipher with the following cards: 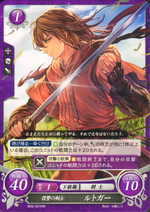 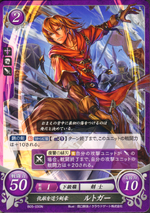 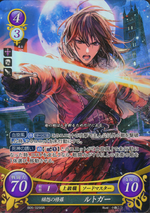 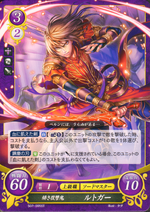 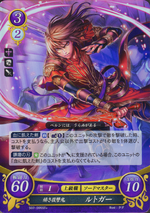 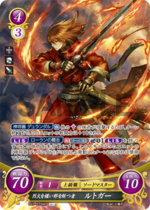 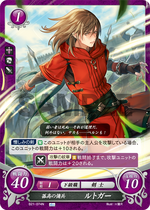 Rutger is Dutch for Roger.[1] The pronunciation would actually be ルトッハー Rutohhā in Japanese because the letter 'g' is pronounced as [ɣ] (a voiced velar fricative) in Dutch. Rutger itself means famous spear.