Archer
[view]
“Brother... I volunteered to be an Altean knight because I was watching your back, following your steps. ...And that's why it makes me happy to hear that kind of praise from you.”
—Ryan to Gordin in a base conversation in New Mystery of the Emblem

Ryan is an archer of Altea and the younger brother of Gordin. He joined the Altean army after hearing of his brother's exploits in the previous war.

According to the Takayashiki Hideo's Mystery of the Emblem novel adaptation, Ryan is 17 years old. [1]

Ryan has amazing availability as he is the second character in the game to join you on your quest. He also has good bases, good to amazing growths in everything except Defense and access to multiple Class Sets once Hard Mode has been beaten once. His main strengths are his Strength and Skill giving him very good damage output with hard and accurate hits plus a good amount of critical hits. The areas he suffers in are his Evasion with shaky bases and growths in Speed and Luck, his inability to retaliate once attacked from melee range(like most archers), and low durability thanks to his low base HP and Defense growth.

If reclassing is considered, Ryan can fill many roles in your army:

Cavalier->Paladin/Dracoknight: Ryan still retains his offensive nature,but he gains overall better stats with far more mobility and melee weapons; however, he gains lower Speed and a lower weapon rank. The extra mobility helps Ryan finish the last few enemies in a chapter or allows him to get to chokepoints in order to block incoming enemies. Once he promotes, he can either retain his overall stats as a Paladin or get some much needed Speed and Resistance as a Dracoknight.

Once Hard Mode has been beaten once:

Knight->General: He will have good stats in everything except his abysmal speed and even use his Bow Rank once promoted. With his Defense, he should take most physical threats but as soon as a Magic-User reaches him, you might as well say goodbye to Ryan as he will most likely take the full damage of said Magic-User's attack twice. If the player is willing to invest most if not all Speedwings into Ryan, he will make for a very good unit. Even without that he can be a very good Armor Knight.

Pirate->Warrior: Ryan will be very grateful for the extra HP and Speed the Pirate Class gives him while also boosting his already high damage output by giving him more Strength and the strongest Weapon type. The weaknesses of this path are mostly connected to the time as a Pirate and not once he promotes to a Warrior as Ryan will suffer from a lack of ranged combat until he either gets a D Rank in Axes to use the Hand Axe or until he promotes into a Warrior to get Bows \. He will also have relatively low Defense, even for someone who was an Archer.

Hunter->Horseman: This is very similar to the normal Ryan, but he will be more mobile and have more Strength at the cost of lower overall stats.The biggest change is the promotion. As a Horseman he will gain: a Mount, extra movement, and the ability to wield swords thus being able to fight in melee range.

"Ryan stayed in Altea and joined the Temple Knights. Though young, he did his absolute best as a knight."

Ryan is illustrated in the trading card game with the following cards: 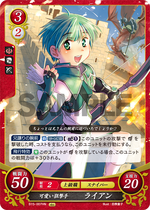 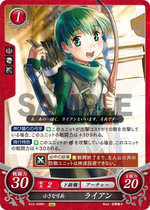 Official artwork of Ryan from The Complete.

Artwork of Ryan from the TCG.

Ryan, as he appears in the sixth series of the TCG as a Level 10 Archer.

Ryan, as he appears in the sixth series of the TCG as a Level 20 Sniper.

Ryan as a Sniper in Fire Emblem 0 (Cipher).

Ryan as an Archer in Fire Emblem 0 (Cipher).

Ryan's portrait in Mystery of the Emblem.