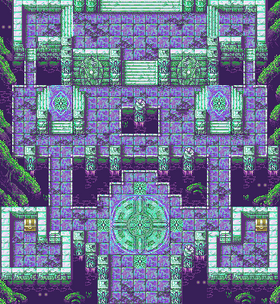 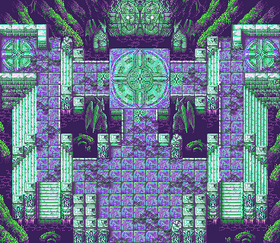 Chapter script
[view]
“Of course. I know... You are Ephraim, after all. You could do no less, my friend. Well, come then, Ephraim. Try and stop me. I will defeat you, and then I will save the people of Grado. No one... No one will stand in my way.”
—Lyon to Ephraim before battle (Ephraim's Route only)

Final Chapter: Sacred Stone is Chapter 21 of Fire Emblem: The Sacred Stones, and the last chapter besides Creature Campaign. It takes place inside of the Black Temple. The boss is Lyon, who commands his monsters to stop the royal twins from reaching him. The objective is to kill Lyon. After said objective is completed, along with a short cutscene, the player must face the newly reawakened Demon King, Fomortiis, and the monsters that he summons. After the death of Fomortiis's body, Eirika and Ephraim seal his soul into the Sacred Stone of Rausten.

The 3 Wights that block the direct path to Lyon do not attack you during enemy phases. It is then somewhat implicitly recommended that you take the side stairs to flank Lyon instead of the direct path up.

Note: All directions refer to Eirika's story. In Ephraim's story, everything appears from the opposite side.

Depending on how you want, always use the opposite path to proceed without getting yourself swarmed. If you went with Eirika's story, move units to the left path. Use units like a Druid, Summoner and Bishop north of the sign near your starting point to deal with the Wight snipers and the Arch Mogalls that will come in.

Ignore the Gorgons in the chest room on the opposite path (unless you want to loot the chests). Lure the Draco Zombie with a Phantom after you've dispatched the Arch Mogalls, and just as you did with Morva, do the same to it. The Draco Zombie on the left should be dealt with, and ignore the one on the right, as it will not move during enemy phases unless it has a unit it can attack within its range. Deal with the units on the top left and wait out 10/11 turns for the Gorgon's Shadowshot to be used.

Lyon has incredibly high Defense and Resistance, so don't bother using Light spells like Divine or below. However, using Phantoms can slowly chip off his health (depending on who is the Summoner and what axes they use, they should deal around 1-15 damage on him). Once his health falls to either 52 or 48, bring in the Summoner (make sure they have Luna, as it ignores enemy Res.). As well, he can only attack two spaces in any direction, so giving an Archer a Longbow can be effective. After he dies, you're on to the second part.

The Demon King has been revived, and now you need to kill him. He has 120 HP, which makes him have a ??? when fighting. You may want to lure him out first before you do anything. Once you end your first turn, he will summon eight random units. The units will be unable to move until the next enemy phase, so get them close to you so you can deal with the Demon King without any monsters to interfere. Bring a Berserker with Garm and a Swordmaster with Audhulma. If one manages to deal a critical, it makes things a whole lot easier. Remember to use Physic or Fortify before ending your turn, or he'll kill one of your units. Bring a Restore or the Latona staff incase he uses Nightmare on your units.

If you went with Ephraim, do the opposite of everything (except killing Lyon, wasting the Gorgon's Shadowshots,  the strategy for the Demon King, and luring the Arch Mogalls with your mage units).

When Lyon finally dies (he still survived after being defeated by the twins), he will say the following lines depending on the lord you went with:

Fomortiis does not have any quotes; the body only disappears until his head disappears, the screen turns white, and finally black, but he's gone.