Priestess of Tahra
Servant of Linoan

Chapter 2x: The Pirate Isles (joins in Chapter 3: The Gate of Kelves)

Priest
[view]
“When I left Tahra, I swore to the war god, Heim, that I would not fear death as long as I could help the savior of my town. You need not worry about me. If I could be of any assistance to you, then please take me along.”
—Safy to Finn

Safy is a playable character from Fire Emblem: Thracia 776. A priestess of Tahra, she is the servant of Linoan and the elder sister of Tina. Safy is the only character who is able to use the Repair Staff in Thracia 776.

In the service of Linoan, the duchess of Tahra, Safy was sent out to find and recruit people to assist in the effort to combat the invasion of the Grannvale Empire. She was, however, unfortunately captured by Lifis and his pirate group while carrying out her mission.

Despite being captured, Safy does not forget her mission, making an attempt to convince Lifis to fight for Tahra in Chapter 2x. While he agrees to her request, unbeknownst to her, he has actually lied to get her to marry him. Leif and the Freeblades of Fiana storm Lifis' hideout shortly after, defeating Lifis and rescuing Safy from his clutches. Safy then convinces Leif to let Lifis join the Freeblades of Fiana, believing him to be a good person at heart.

Safy, along with the rest of the Freeblades of Fiana, is later separated from Leif and Eyvel in Chapter 3, as the prince is captured by Raydrik. After Leif manages to escape from Manster, Safy, against Finn's advice, insists on accompanying him to save the prince in Chapter 7. Recognising Shiva as a mercenary who had once briefly worked for Lifis' pirates in this chapter, she recruits him to Leif's cause after asserting her resolve to sacrifice herself to protect the prince.

When Leif's army later passes through Dakia Forest and defeats Colho and Salem in Chapter 12, they discover the hideout of Perne's gang of bandits. Safy can be deployed in this chapter to be reunited with her younger sister Tina, whom she will berate for rashly leaving their home before getting her to join Leif's cause.

Safy then goes on to continue supporting Leif in his cause to liberate Northern Thracia from the Grannvale Empire. She returns home to Tahra thereafter, dedicating her life to helping the needy and impoverished.

Loyal and patriotic, Safy is strongly dedicated to the mission ceded to her by her mistress Linoan, where she travels all over Thracia looking for able people to recruit to aid in the defence of her country. Her dedication is made especially obvious even when she is taken prisoner by Lifis' pirate gang, as she continues trying to persuade him to fight for Tahra despite the danger she is placed under.

Safy is also a courageous person, choosing to take to the battlefield to fight for Leif, whom she believes will restore peace to Thracia. This can be seen in her conversation with Shiva, where she expresses a willingness to sacrifice her life if it means that she can protect Leif from harm.

Safy's early recruitment, along with her respectable Staff rank, early access to Warp, and monopoly over the Repair Staff make her what is one of the best units in Thracia 776. While other staff users will show up down the line, only Safy will be able to repair equipment or enable early-game Warp abuse. It is generally recommended to promote her as soon as she hits Level 10, as it will boost her weapon rank by 1 and allow her to gain access to Warp earlier.

On this note, you should be cautious about using Safy's Repair Staff on weapons. While Thracia 776 is full of many powerful personal weapons, you will likely get more mileage out of repairing the Thief Staff or even Warp staves.

As the Lena archetype of Thracia 776, Safy functions primarily as a healer. However, her mobility is very low, so she will quickly fall behind the army unless she is using the Fortify or Physic staves. Her low base HP and virtually nonexistent Defense mean that she needs to be kept away from the frontlines as much as possible. Leaving her unequipped is better for her survival, as enemies will only capture her rather than attack her due to her low Build.

Safy: Oh, you're...
Shiva: Ah... So we meet again.
Safy: Why are you doing this? You're not a bad man...
Shiva: I'm just doing my job. It's of no concern to you. Now move.
Safy: ...No.
Shiva: ...You're going to sacrifice your life for that kid?
Safy: If that's the case...then so be it!
Shiva: ......
Safy: Thracia needs Lord Leif! I would gladly give my life to ensure that he arrives there safely!
Shiva: Hmph... You say some pretty stupid things sometimes, don't you? Fine... Have it your way.
Safy: What!? Then you're going to help Lord Leif?
Shiva: Yeah. Might as well, you know? But let me say this. Don't ever talk about death lightly in front of me. If there's one thing I hate, it's people rushing to get killed.
Safy: I'm sorry... I'll be more careful.
Shiva: Can I ask you something? What is it that you want? What would make you smile with your heart?
Safy: I simply want to see the people living happily in peace. If they are smiling, then I will be as well.
Shiva: I see... Guess I shouldn't have asked. Anyway, my name Shiva, from Savan. What's yours?
Safy: Safy...from Tahra.

Safy: Tina!? What are doing in a place like this?
Tina: Big sister Safy! Waaahh...
Safy: Why are you crying? What happened? Why did you leave Tahra!?
Tina: I wanted to help you, so I left the city... But then I was captured by a thief named Perne, and he made me his slave...
Safy: Slave!? Tina! What did he do to you!?
Tina: He told me to help him steal with the Thief and Unlock staves...
Safy: Why didn't you refuse?
Tina: I did... But then he did terrible things to me...
Safy: Terrible things!?
Tina: Yes...
Safy: What did he do to you, Tina!? Tell me! I'm prepared for the worst!
Tina: He... He takes huge bugs and puts them on my face... I-I was so scared... I thought I would die.
Safy: ...Is that all?
Tina: Yes... But I was really scared. Just remembering it gives me shivers...
Safy: Tina...
Tina: Yes?
Safy: I told you to stay in Tahra until I returned. Now, you see what happens when you don't listen to your big sister? I hope you've learned your lesson.
Tina: Yes, I'm sorry... Oh, Safy, don't you think Lord Leif is so handsome? My ideal man would be a prince like him... What do you think, Safy?
Safy: Tina... ...I'm a little tired. Let's talk later.
Tina: Okay, big sister!

Safy - Servant of God (神につかえし者 Kami ni Tsukaeshi Mono lit. The One Who Serves the Gods)

"Safy made her way back to Tahra, and devoted herself to healing the sick and helping the poor. The people looked at her like she was divine, and eventually began to speak of her as if she were a goddess herself. "

Safy is illustrated in the trading card game with the following cards: 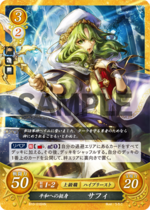 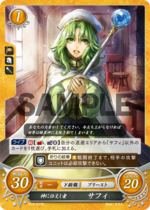 Artwork of Safy in Fire Emblem 0 (Cipher) by Uroko.

Artwork of Safy in Fire Emblem 0 (Cipher) by Uroko.

Safy as seen in the TCG as a Level 10 Priest.

Another card of Safy from the TCG as a Level 10 Priest.

Safy as a High Priest in Fire Emblem 0 (Cipher).

Safy as a Priest in Fire Emblem 0 (Cipher).