Chapter 12: The Thieves of Dakia (Joins in Chapter 23: The Palace of Evil)

Ben Lepley
[view]
“Saias, the Royal Bishop of House Velthomer and a military genius, has taken the field. As long as he commands the enemy, we don't stand a chance!”
—Dorias in a conversation with Leif in Thracia 776

Saias is a playable character from Fire Emblem: Thracia 776. He is the illegitimate son of Arvis and Aida, as well as the grandson of Cowen, Victor and Cigyun. He is the paternal half-brother of Julius and Julia and Seliph's cousin.

From his father, he is a major-blooded descendant of the Crusader Fjalar, allowing him to wield the Valflame, and a descendant of Saint Maera as well.

Saias is a bishop of the Bragi Church with a high position in the court of Velthomer and one of the greatest tacticians in the history of Jugdral. He is kind and friendly to everyone he meets. As revealed in Chapter 22 of Thracia 776, Aida died protecting Saias from Manfroy, who sees him as a potential threat because of his Fjalar blood.

Some time after Mareeta falls victim to the Shadow Sword, Saias removes its curse and convinces her to get over fighting against Brigid, since she was possessed. He also convinces her to accept the Shadow Sword because she must love all blades to be a true swordmaster, and it becomes Mareeta's Sword, a personal weapon for her. In Chapter 23, Ced gives the Bragi Sword to Saias, who in turn passes it to Leif.

He appears twice as an enemy prior to his recruitment and his presence greatly boosts the fighting abilities of his allies, since he is very charismatic. If Ced is recruited during Chapter 23, Saias will leave Leif's army to travel to Bragi Tower without giving his reasons as to why.

After the liberation war, his talent is recognized by Seliph, and Saias enters the service of Grannvale. He also greatly contributes to its reconstruction.

As an enemy, Saias makes Chapter 17A and Chapter 22 very difficult for the player due to his leadership stars. However, when he joins at the beginning of Chapter 23, he has only about half of the stars that he had before. The player must choose between him and Ced, who outclasses him at combat, although Saias also has utility with staves. If the player decides to use Ced instead of him, remember to take his three staves (a Heal Staff, a Warp, and a Silence Staff) off of him before the end of Chapter 23.

Saias on his own merits is a very solid unit. He has A-rank staves that allow him to use powerhouses like Warp at base, and his 18 base Magic allows him to inflict status on the vast majority of the game's enemies. While his missing Leadership Stars are irritating, three stars is still a not-inconsiderable 9% boost to the Hit and Avoid of all your units, more than any other playable character with Leadership Stars. In combat, he isn't amazing, with somewhat lower Speed and poor overall durability, but his Magic means he can take chunks out of most enemies with Light magic, and even if caught unawares, his Nihil skill will protect him from errant criticals. He also has a few levels left to grow, meaning simply handing him Speed-boosting scrolls can push him over the threshold of insane power. Lastly, three Movement Stars furthers his effectiveness at all of the above.

Unfortunately, Saias is mutually exclusive with Ced, who is arguably the game's most powerful combat unit, as well as an A-rank staff-user in his own right. Compared to Ced, Saias's only major advantages are his Nihil skill and slightly greater Movement and Leadership stars. These advantages do further him as a support character, making Saias the slightly preferable option if all the player desires is another A-rank staff-user, but those planning to have him see combat would be much better-served with Ced.

Bishop of Flame
A priest of Velthomer; known as one of the greatest tacticians. The brand of the crusader Fjalar resides in his body. Appears in Fire Emblem: Thracia 776.

Much like his father does with red mages, Saias fulfills a fairly unique niche among blue mages in Heroes; he is a support mage who, rather than supplying buffs or healing to the team like Delthea or Bridal Ninian, reduces the enemies' stats through the use of Ploys. Between Wargod's Tome and Speed Ploy, Saias shreds the stats of any enemy within a cardinal direction as long as they fail to match his Resistance, which at base is a staggering 34. Equipping a Defense Ploy seal to him will allow him to reduce all four stats of an enemy without even getting directly involved in combat. The refine boost greatly benefits this role, as he will debuff foes regardless of their resistance, always stripping 3 points of their attack and resistance, and not only those within cardinal directions of him, but also those at least 3 spaces near him, both vertically and horizontally. The special refine adds any debuffs of his target on his attack stats, meaning he will always have at least 6 points of attack more to tackle through.

When it comes to getting involved in combat, Saias does his job adequately, being able to tank many other mages thanks to his 34 Resistance, and with his base 33 Attack (47 with his tome) he hits reasonably hard to boot, using Glacies to turn his huge Resistance into a weapon. 30 Speed does not bode well for Saias either, not even being able to double Sanaki or Julius without support, while being doubled himself by fast mages like Nino and Tailtiu. This comes compounded with the issue of having horrible base Defense, leaving him a sitting duck to any physical-damage unit who can initiate on him, while forcing him to be mindful of units who have Distant Counter.

Saias is poorly equipped to handle direct combat that he isn't prepared for. This typically includes cavalry, bows, and any Distant Counter-wielding units with decent Resistance, such as Fjorm. Given that he is not as strong at single combat as a result of his poor Speed, he is easily baited to his doom when controlled by the AI. Long story short, any unit who can initiate on him is guaranteed to leave a mark. If his Speed gets debuffed, it will greatly broaden the number of units who can double him, taking advantage of his low health to dispatch him quickly.

The good news is that Saias's best inheritance options are cheap and easy to find, only really wanting Fury, an assist (preferably Draw Back) and a B skill catered to his team. He can also change Glacies to Iceberg to get the big damage special happening sooner. Otherwise, he is fairly okay with his base kit. Fury gives Saias a much needed boost in varying areas, most notably Speed (to prevent more doubles) and Resistance (to activate more Ploys). That B skill will usually end up being a breaker like B Tomebreaker to circumvent his disappointing speed in more troublesome matchups.

"Saias returned to the family lands of House Velthomer, and dedicated himself to rebuilding them. His talents were noticed by Holy King Seliph, who recruited him to help rebuild the Kingdom of Grannvale as well."

Saias is illustrated in the trading card game Fire Emblem Cipher with the following cards: 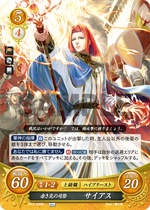