Cavalier
[view]
“May I have the pleasure of your name? Or better yet, your company?”
—Sain to Lyndis when meeting her in Footsteps of Fate

Sain is a playable character in Fire Emblem: The Blazing Blade. He is a knight of Caelin, and one of the cantons of the Lycian League. He and his friend Kent were sent by the marquess to Iocate his granddaughter for him on the plains of Sacae.

Trained as a knight of Caelin along with his friend Kent by General Eagler, the knight-commander of Caelin, the pair are deployed to Sacae on a mission from the Marquess of Caelin, Lord Hausen, to locate and bring back his granddaughter, Lyndis. While looking for information in Bulgar, the largest city in Sacae, the two knights have a chance meeting with Lyndis and Mark. They escort her back to Caelin and help her defeat her granduncle Lundgren, who had been poisoning her grandfather in an attempt to seize the throne of Caelin. In the aftermath of the attempted usurping, Sain is promoted to sub-commander of the knights.

Sain is present during the siege of Caelin by Laus' forces. One of the few retainers who flee Castle Caelin with Lyn to plan an assault, Sain eventually joins up with Eliwood and Hector's army and succeeds in reclaiming the castle.

Following the successful retaking of Castle Caelin, Sain joins Lyn in her decision to accompany Eliwood and Hector on their journey. At the end of this journey, Sain is noted to resign from his post as a member of the Caelin Knights following Ostia taking over Caelin's rule. Acting as an independent knight, Sain can, depending on his supports, either be wed to Rebecca or Fiora.

Sain is a jovial skirt-chaser of a knight, considering his attraction to all women to be his "curse". Although he is a bit roguish, Sain is dependable and good-hearted, a fact evidenced by his staunch loyalty to Lyn, one that resolutely lasts from the time he and Kent first encounter her.

In a support conversation between Sain and Kent, Sain hints that Kent has a crush on her. Being the woman-chaser that he is, Sain also claims to have a crush on Lyn, but gallantly chooses not to pursue her, instead encouraging Kent to declare his feelings for her.

Description: A knight in service to house Caelin. A bit of a scoundrel.

Offensively, Sain will quickly develop his Strength faster than most other units, and will have an easy time dealing a lot of damage to enemy units. His combination of Movement, Speed, and Strength gives him the ability to swiftly strike down key target units with almost unparalleled efficiency, something that makes him highly viable for S-rank runs.

However, Sain has mediocre Skill early on, often facing issues hitting opponents that he cannot achieve a Weapon Triangle advantage over (namely lance users); the situation is reversed with Sain's counterpart, Kent, who has good Skill but faces an inconsistent growth rate. In addition, Sain will likely cap his Strength rather quickly due to having a rather average Strength cap, meaning other characters can eventually become on par with him in terms of damage output towards the end of the game. However, Sain has some good offensive supports, such as with Fiora or Priscilla, that can compensate for his mediocre hit rate, as well as give him additional attack power. If the player wishes, he/she can opt to promote Sain in Lyn hard mode, his only competition being his boon companion and Wallace. While you can boss abuse in Chapter 9, it may be possible for Sain to have reached level 10 some time earlier than that. It may be a good idea to train up his axe rank as soon as possible after promotion, as axes complement his high Strength.

“I won't hold back! This is for all the lovely ladies I've yet to meet!!”
—Sain

Sain has earned the honor of being named sub-commander of the Caelin Knights. Despite his promotion, he stills scoffs at authority and woos the village girls. He is much loved by the citizenry.

When Ostia took over the rule of Caelin, Sain resigned and became an independent knight. His love of women is unchanged.

When her grandfather died, Lyn asked that Caelin be taken under Ostian protection. Sain requested a discharge and moved to Pherae with his beloved Rebecca. Their son is nothing like his father, thankfully.

Although they returned to their respective countries, Sain and Fiora continued to seek each other out. When Lyn abdicated Caelin’s rule to Ostia, Sain resigned his commission and moved to Ilia. They later wed.

Sain is illustrated in the trading card game with the following cards: 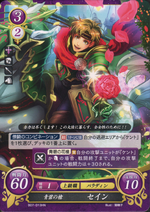 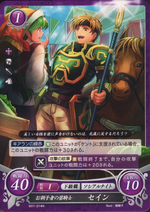 Artwork of Sain in Fire Emblem 0 (Cipher) by Nekobayashi.

Artwork of Sain in Fire Emblem 0 (Cipher) by Nekobayashi.

Sain as a Paladin in Fire Emblem 0 (Cipher).

Sain as a Cavalier in Fire Emblem 0 (Cipher).

Sain as a Cavalier with a lance.