Saizo is a subordinate of Ryoma, and the older brother of Kaze. He has a hotblooded personality that can become fired up and as a result, his partner and best friend Kagero often has to restrain his recklessness.

Saizo and Kaze are members of a ninja clan from the Hoshidan mountains, who have served the Hoshido royalty for years. Their father, the former Saizou, was killed by Kotarou in an unknown incident, and he attempted to avenge his death but failed and as a result suffered a scar on his right eye.

Like Kaze, Saizo is very handsome. He is well aware that his face attracts women, so he hides his face in order to smoothly carry out a given task. On the other hand, Kaze does not seem to realize that he is very attractive.

In his supports with Kagero it is revealed that the two of them were lovers at one point in the past, however gave up their relationship to dedicate themselves to serving Hoshido. Said relationship can be potentially rekindled through an S-Support.

If he achieves an S-Support, he will have a son named Gurei.

In contrast to his brother Kaze, who is very calm, Saizou is brash and temperamental. He also becomes very frenetic when provoked, experiencing tremendous surges of passion that compel him to behave rashly and irrationally. This fact is made particularly evident in Chapter 17 on the Conquest route, where Saizo, guided by his feelings of seething hatred towards Kotarou, blindly throws himself into the heat of battle in a bid to exact vengeance on the man responsible for his father's demise.

Saizo has also been portrayed to be extremely cold and unfriendly towards people whom he is unfamiliar with, a fact that extends towards his allies. This is not without a cause, however; given his occupation as both a spy and one of two personal bodyguards of Ryoma, it thus comes as no surprise that he chooses to maintain a hostile attitude as a measure of caution. Saizou's careful vigilance is made especially evident through his initial support conversations with people like Azura and Avatar, where his inability to trust anyone with a Nohrian background causes him to constantly keep a close eye on their actions under the justification that they could be plotting something sinister. Still, if said person with Nohrian ties proves to be trustworthy, Saizou will aknowledge it; in example, Azura earns said trust by not only refusing to abandon him when he's wounded protecting her, but by dressing his wounds.

Juxtaposing Saizo's anti-social behaviour is the fact that he is extremely shy regarding gentler emotions, becoming very easily embarrassed and flustered whenever people either display affection towards him or tease him; through his supports with Sakura, for one, he becomes visibly agitated when she light-heartedly remarks that it is hard to imagine him purchasing candies, dropping his usual facade of cool level-headedness as he stutters uncontrollably before hastily departing from her side.

Through Saizo's supports with Laslow, he is revealed to be a keen, astute observer, possessing the ability to determine a person's origins and history by watching their swordsmanship skills.

Like Kagero, Saizo is loyal to Ryoma and would gladly sacrifice his life for him.

He hates sweets the most out of everyone in the army. His birthday is October 2nd.

◾ Note: Growth Rates as a Mechanist

Saizo as he appears in Fire Emblem 0 (Cipher).

Saizo as he appears in Fire Emblem 0 (Cipher) as an Elite Ninja. 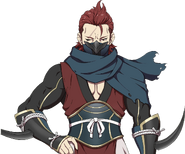 Saizo's model for My Room. 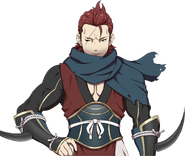 Saizo's maskless model for My Room.
Add a photo to this gallery