Kamran R. Khan
[view]
“I came from Caer Pelyn. I have been entrusted with the honor of being your escort. Protecting you, Great Dragon, gives my life meaning.”
—Saleh talking to Myrrh in a support conversation

Saleh is a playable character in Fire Emblem: The Sacred Stones. He is a powerful magic user, the grandson of the Chief Elder of Caer Pelyn mountains, and a escort of the dragon Myrrh.

Saleh is the grandson of Dara, the chief elder of Caer Pelyn, and like his grandmother he is an accomplished mage. He is solemn and intellectual, but is quite generous and is a mentor to Ewan. He is the dragon Myrrh's escort and faithful servant, though both were separated prior the beginning of the story, when Myrrh ran away to investigate a mysterious force coming from Grado.

Sometime prior to the events of the game, Saleh killed a friend of Gerik's during a job. Eventually, Saleh would save Gerik in an unknown incident. Gerik forgave him for the death of his friend, and the two became friends.

Saleh is first seen in Chapter 5, where he appears mysteriously in Serafew town and asks Eirika where Myrrh went. He then leaves without revealing his reasons and identity, making an odd first impression on her.

In Eirika's path, by chance Saleh meets her again some time later, when Eirika wants to transpass Caer Pelyn to reach the other side of the continent, and his pupil Ewan asks his permission to accompany Eirika's group to Caer Pelyn, which he accepts and instead guides them himself, since the road is too harsh. In the way monsters attack, and they defend themselves from the assault. Saleh joins Eirika's army during this battle in chapter 12. When they arrive Caer Pelyn, Saleh hosts them in the village along his grandmother, while Eirika and her group decide to stop there some days to rest and heal from some injuries and the altitude sickness from the high mountains.

He decides to travel with Eirika, upon discovering, through the princess, that Myrrh who was missing, was actually traveling with Ephraim, so he departs with the army to be reunited with his protégé. During the journey, Saleh acts as sort of a spiritual mentor to Eirika, sharing knowledge of old lores and teaching her the meditation technique Valega, as a means to enlighten and clear her mind.

In Ephraim's path, Saleh drops Ewan off at Taizel so that he could speak to Marisa about the guild's mix-up, before departing to Caer Pelyn. He then joins Ephraim in Chapter 15, where he is seen already with Eirika and Innes. Myrrh and Saleh are finally later reunited in Jehanna.

After the war, he returns to Caer Pelyn mountains and keeps fulfilling his role as Myrrh personal protector. If he reaches A support with Eirika, they will marry, and will have a daugther said to be very similar to the legendary princess Nada Kuya.

Saleh is an enigmatic, wise and highly spiritual man. He has a calm disposition, living in harmony with the nature in the mountains. He mastered a powerful meditation technique called "Valega", which allows him to forget about worldly problems and see life as it truly is, and he can be seen meditating even in the battlefield. He doesn't care much about status, wealth and other mudane things that would distract an ordinary person. Saleh also takes his duty of being personal protector of the great dragon Myrrh very seriously, to the point of being too strict and unnecessarily solemn around her.

He is a very skilled magic user, and always shares his knowledge with anyone who seeks it. As a teacher he is patient but can be also intimidating and stern. Saleh knows a vast repertory of myths and legends of the past, but is particularly fascinated with the legendary princess Nada Kuya and the dragon Morva.

*9 in the Japanese version

Saleh is very similar to Pent, in that he is a prepromoted Sage that joins in the midgame with impressive stats and weapon ranks that allow him to immediately contribute. His fantastic offensive bases of Magic, Speed, and Skill allow him to easily one round nearly any enemy from both the player and enemy phases with his anima magic, and he can keep this up for the entire game. In addition, his good con and base A rank in anima make him one of the best users of Excalibur, with which he breaks even on his speed but gains an incredible attack boost that even further increases his already fantastic offense. Saleh's C rank staffs and high Magic also makes him one of the best staff users, and the only other staff user that can achieve both a high staff rank while also gaining high magic as quickly as he can is Artur.

Though Saleh has few problems, his most notable is his lackluster HP and Defense that makes him less durable than many other members of the roster. He has good Resistance that makes him nearly immune to magical attacks, and his good Luck and Speed will allow him to dodge some attacks, but players will want to be careful with his survivability. He is not frail, but he should not be counted on to endure more than two attacks, or even more than one in the case of stronger enemies. Overall, Saleh is one of the strongest characters in Eirika's route with his fantastic offense and staff utility, and a worthy late joiner in Ephraim's route, despite his slight problems with his Defense and HP. Even though Lute and Ewan can surpass him statistically, his ease of use and lack of required investment make him a very standout playable character.

Saleh, the Well of Wisdom (黙する知の湧水 Mokusuru chi no Yū-sui)
"Saleh returned to Caer Pelyn, where he remained a faithful servant of the Manakete. His days were not spent in isolation, though. Many of the friends he met during the War of the Stones came to visit his village."

A Support with Eirika
"After the war, Eirika and Saleh returned to their respective homes. Eirika visited Caer Pelyn when she could. Eventually, she left Renais in the care of her brother and wed Saleh. Their daughter resembles the legendary Nada Kuya."

A Support with Ewan
"Master and student returned to Caer Pelyn to study in peace. Ewan worked hard, and in time, his power grew to rival Saleh's. As equals, the two continued their studies together and expanded their knowledge ever more."

A Support with Myrrh
"Myrrh returned to Darkling Woods, but at Saleh's request, she eventually moved to Caer Pelyn, In time, the townsfolk learned to treat her not as the Great Dragon but rather as a normal girl, and she was happy."

“Hm... Can my magic prevail?”
—Final Chapter Quote in The Sacred Stones

Saleh is illustrated in the trading card game Fire Emblem Cipher with the following cards: 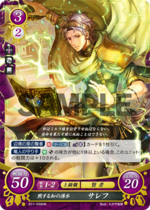 Saleh means 'faithful' in Arabic. In Islamic history, there was a prophet known as Saleh (also spelled Salih or Soleh) who brought a camel out of a rock.