Samson (Shadow Dragon and the Blade of Light)

Chapter 17: Setting Sun of Gra (Mystery of the Emblem)

Hero
[view]
“My name is Samson. Once, I was a swordfighter of some renown…but that was then, and this is now. I’m happy enough with my life here in the village, but if you need another man, I will fight. Unfortunately, there has always been bad blood between our village and the next one over. They’ll have closed the gates to you the moment they saw you come here. Guess that means the paladin Arran won’t be fightin’ with you. Them’s the breaks.”
—Samson to Marth

Samson is a playable character from the Archanea series. He is a gladiator currently residing in Altea. When Marth comes to help free the land, Samson will join, but only if his neighbor, the Paladin Arran, has not joined the army yet due to a feud between the villages where the two reside.

A few years later, when Archanea invaded Gra, he was hired by Princess Sheena as a bodyguard and they grew attached to each other. When Sheena joins Marth's army, Samson joins alongside her. After the war, he makes a permanent residence in Pales, presumably to stay with Sheena.

Unlike most mercenaries, Samson puts his morals ahead of his payment, and will not cheapen his ideals for anyone. Samson has no desire for political power, and enjoys his simple life.

While Samson has lived in Altea for many years, he does not count himself strictly as an Altean, and has traveled the world, having protected a village in Archanea's capital of Pales for a while sometime prior to the War of Shadows.

As such Samson believes the conflict between Gra and Altea is unnecessary, and can be worked out between Marth and Sheena, believing that, while Marth is young, he possesses a good heart. However if Sheena is killed by Marth's forces, Samson's faith in Marth is destroyed, and he proclaims him as "just a murderer".

Samson is recruited from the right village in Chapter 16. Recruiting Samson will result in the player not being able to recruit the Paladin Arran from the neighbouring village. A thief heads towards the two villages at the beginning of the level and must be intercepted in order to prevent the villages from being destroyed.

Both Samson and Arran are stat-wise even. They are essentially meant to replaced units that have fallen behind experience-wise or died. Samson should be the player's choice if player is lacking a useable Mercenary/Hero type unit.

Samson in Shadow Dragon and the Blade of Light and Book 1 of Mystery of the Emblem will very rarely be one of your strongest units upon his join time: his based and growths are generally low, but he has his uses because of his generally high base stats, and will easily be able to wreak havoc with the Silver Sword he joins with.

In Book 2 of Mystery of the Emblem, however, Samson becomes a notably powerful unit, with some of the highest base stats in the game in skill and speed, and decent strength and defense. His weapon level of 12 makes him able to use every sword in the game at base, and his resistance is decent for a physical unit in Book 2. His low luck is fixed by his incredible luck growth, and his strength growth is good enough that his base in the stat will not cripple him later on. His speed and skill growths are admittedly low, but this is not much of a problem given how high his bases are in those stats.

As with most units in Book 2, his stats can easily be patched up with the readily available Star Shards and later Starsphere, boosting his capabilities to incredible levels.

All in all, Samson is a good choice for a filler unit in Mystery of the Emblem's Book 1 and Shadow Dragon and the Blade of Light and in Book 2.

As far as pre-promoted units go, Samson is one of the better ones in the game. His 16 speed (15 with effective weapons) will let him double most unpromoted enemies at base in the chapter he joins. He also has a B level in Axes and a Silver Axe in his inventory. In addition to that, he can use Hand Axes and Hammers at base for chip damage or armor-busting. However, his real use is in forged Poleaxes due to the high number of Cavaliers/Paladins in the game, and on Hard 5, It's more important to kill enemies without taking damage.

That's where his perks end, though. He is not a cavalier or a flier, which leaves him with poor mobility. His 24 HP and 9 defense won't let him take more than 1 hit on Enemy Phase, especially from promoted enemies. His D level in Swords also means that he cannot use the Wyrmslayer at base, which won't let him deal with dracoknights very well, let alone a single one. And While 10/14/16 is a good offensive statline, other units can do better, particularly a reclassed Barst and he will also have roughly a B-level in Axes by then, and they will fall behind on later chapters because you cannot rely on his growth rates for even cheap gains in important stats outside of HP .

As for choosing between Samson and Arran, Samson is generally seen as the pick between the two. His village is closer to Marth and his statline does make a viable filler unit, even if his performance isn't fantastic.

Overall, Samson suffers from durability issues due to his bad defensive statline, but you can't go wrong with an extra horse/armor killer, provided you have the extra slot for him.

In Fire Emblem: New Mystery of the Emblem, Samson stats have been improved and once again, has a high base speed, being 18 by default, being tied for the second fastest character in the game at base. While the increased variety of classes nerfs the Poleaxe considerably, his B in axes (or 135 Weapon Experience) and his class set gives him 3 viable classes for axe use. He can stay as a hero for speed, change to a Warrior to boost his axe rank and defensive stats, or to Berserker for axe rank and a critical rate boost. Because of his very high personal Axe proficiency, he can use Hauteclere after relatively few hits compared to other units.

However, he joins very late to which he can't really contribute. Far earlier in the game, you get many other potential axe users, including Minerva, who can already use Hauteclere when she joins. His stats at this point of the game, are also likely outclassed by other units who have been invested throughout the game.

Overall, Samson is a decent unit, and while he will not be on part with others by his join time, he is a good pick in iron man runs, where your army could potentially be full of replacement units, given the large roster of units the player is given throughout the game.

“Always knew... I'd breathe my last... here on the battlefield...”
—Samson's death quote in Shadow Dragon

Samson continued to ply his trade as a mercenary, but never sold his sword to any but those who met his standards.

"After the war, Samson settled down in the palace town. As a veteran soldier, the people often relied on him in emergencies."

Samson is illustrated in the trading card game Fire Emblem Cipher with the following cards: 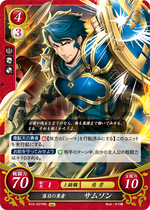 Samson's name originated in the biblical book of Judges. Samson was given great strength, but was a Nazirite from birth and forbidden to ever cut his hair. When Samson revealed the secret of his strength to Delilah, she cut his hair and he lost his strength. Samson was taken prisoner by the Philistines and taken into the temple of Dagon. Samson prayed to God, and God restored his strength one last time so that Samson could destroy the temple; however, he died in the temple's collapse. Samson is known for killing a thousand men with the jawbone of a donkey.