“I'm Samson, a mercenary. You might not've heard of me, but I'm a pretty well-known guy in Arial.”
—Samson, introducing himself to Holmes

Samson (サムソン Samuson) is a playable character from TearRing Saga: Utna Heroes Saga. He is the husband of Katrina and the son-in-law of King Temzin of Arial. When Alicia is attacked by the bandits under Yazam's command, he fights in defense of her. The two of them are eventually reinforced by Holmes and join his army. Later in the game, he can speak to Katrina and receive a Brave Axe from her.

In the ending, Samson's identity as a member of Arial's royal family is revealed to Holmes, who believes that he has tricked him. Afterwards, he returns to Arial with Katrina and Temzin.

Samson is one of the strongest fighters in the game, boasting stronger growths and bases than any of the other axe-wielders. Samson is not a slouch in the ability department either, learning Continue, to allow him to finish off stronger foes who need one more attack (and with his Strength, that is all he will need) and Awareness to stop more deadly skills from activating on him. Axes are tricky things to aim with, but Samson has a high enough Skill growth that he can hit most enemies most of the time, and still have respectable odds against more evasive opponents. Combining all of that with high Strength and Speed, Samson is a very powerful fighter who should be a staple of the player's army.

Samson was a ruler of Israel during the book of Judges. Because he was a nazirite (one devoted to God), he was forbidden to cut his hair. He was given great strength by God due to his devotion. He did many famous things, like killing 2,000 men with the jawbone of a donkey, but perhaps a more famous story is "Samson and Delilah". Delilah tricked him into telling her why he's so strong (it's because of his long hair). In the night, she got a guy to cut his hair and she told the Phillistine army to capture Samson. He fell prisoner due to lack of strength and being blind. However, over time, Samson's hair grew back, and he asked God if he can give him back his strength so he can unleash one last blow on the Phillistines and so he can die with them. It occurred, and the building he was chained to fell down and killed many people. 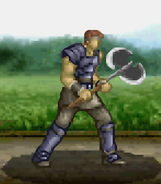