Chapter 6: The Nest of Vice

Mercenary (Mystery of the Emblem)

Myrmidon (New Mystery of the Emblem)

[view]
“Since I look like Navarre, lots of people mistake me for him. So I pretended to be him.”
—Samuel when mistaken for Navarre by Caeda

Samuel is a playable character in Fire Emblem: Mystery of the Emblem and its remake. He is a mercenary who poses as the infamous Navarre.

Samuel is first seen when he is hired by General Lang, who believes him to be Navarre, as a means to defeat the Altean army. He can be recruited by Caeda, who at first believes him to be Navarre, but quickly realises that is not the case. Samuel explains to her that he is just a humble mercenary, but he looks so much like Navarre that he thought he would let people continue mistaking him.

If he is recruited by Ogma, Ogma mentions he is disappointed with Navarre joining the enemy yet again, but understands the two would have to duel eventually. Samuel panics and confesses his true identity. Originally he was a gladiator, but he and his friends were saved by Ogma, who distracted the keepers and ended up getting caught and punished.

After the war ends, Samuel disappears, although there are rumors that he continues masquerading as Navarre. If Navarre died before the end, Samuel trains himself in order to succeed him.

Samuel is very reliant on his Navarre façade to find work, but he's the very opposite of his image, being very lax, flirtatious and social. He is nonetheless serious in paying back his debt to Ogma, seeing him as a hero. He also seems to find the real Navarre amazing as well, as he wishes to learn from him during the epilogue and goes as far to train himself to take up his title if Navarre dies.

Like many units in Book 2 Samuel can be a very powerful unit through the Starsphere shards, but compared to his competition he is the one who needs their boosts the most to be viable. He has solid speed and skill at base and has a solid health growth, but his lackluster strength, luck, and defense growths need immediate attention for him to truly shine. His competition is good enough without reliance on the shards so he can still prove to be a strong unit if his stats turn out well.

Samuel is as ever, mainly a joke unit. Though he does boast a decent sword rank of C, he lacks in the main intended traits of his base class, having low bases in Skill and Speed (in fact, Navarre can double him at base), and a low growth in Skill. His Defense and Strength are somewhat better, but far from good, and his sword rank can be duplicated very easily due to the large number of viable swordsmen. In general, compared to the powerhouses that the player has accumulated at this point and the ones they will recruit in the future, Samuel struggles to find much, if any use.

"Samuel vanished after the war. Rumors say that he continued to impersonate Navarre..."

Samuel is illustrated in the trading card game Fire Emblem Cipher with the following cards: 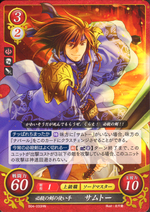 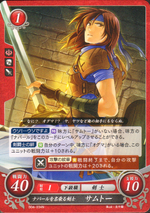 Samuel is a Hebrew name meaning either "name of God" or "God has heard". Samuel was the last of the biblical judges and the one who appointed Saul, and later David as the King of the United Monarchy of Israel.