Empress and Apostle of Begnion
Member of the Silver Army

Erin Fitzgerald
Sara Beth
[view]
“You stand in the presence of Sanaki, empress of Begnion! I am the apostle, the voice of the goddess!”
—Sanaki

Sanaki, full name Sanaki Kirsch Altina, is a non-playable character in Fire Emblem: Path of Radiance, and a playable character in Fire Emblem: Radiant Dawn. The empress and Apostle of Begnion, Sanaki is said to be the vessel of the goddess Ashera. She is a descendant of a long line of Begnion empresses, notably Altina, Meshua, Yoram, and Misaha. In Radiant Dawn, Sanaki is revealed to be the younger sister of Micaiah.

Sanaki is aged 10 in Path of Radiance and 13 in Radiant Dawn. The fire tome Cymbeline is unique to her.

After the previous empress' death, Sanaki was backed by the public in the year 640 to become her sucessor despite being just five years old, with the senate appointing senator Sephiran guardian to the young empress. It is later revealed that Sanaki was installed to be no more than a puppet for the senate in order to quell domestic unrest. However, thanks in part to Sephiran, both he and the young empress not only had the public opinion in their favor, but kept the manipulations of the senate at bay.

At first, she treats Ike and Elincia coldly and with disdain, but it is in fact a ruse, as she needs Ike's help in uncovering a Laguz slave-trading ring that other Begnion nobles are participating in.

After being confronted with the truth around Serenes Forest, Sanaki bowed her head to the herons and begged for forgiveness. Her intentions were deemed genuine enough that even Prince Reyson of Serenes felt his cold feelings toward the beorc lessen.

She escapes Begnion when the Begnion Senate, led by Duke Lekain of Gaddos, seizes control of the Empire; she subsequently forms an alliance with Gallia, Crimea, Phoenicis, and Serenes to reclaim her throne. Lekain later reveals that Sanaki once had an elder sister: only the firstborn daughter of Altina's lineage can hear Ashera's voice, they claim, and so Sanaki is a false Apostle. Sanaki later joins the Silver Army on the march on the Tower of Guidance. Upon defeating Lekain, she discards the title of "Apostle" and rules only as Begnion's Empress. Unlike her older sister (who is later revealed to be Micaiah), Sanaki did not inherit the brand and therefore she cannot hear the voice of the goddess Yune.

Sanaki is very concerned about manners, and is often put off by Ike's lack of respect in his speech. However, she appears to be very respectful to Laguz, unlike most of the Begnion nobility who disrespect the Laguz and call them sub-human, likely due to being raised by Sephiran, whom she has a very close relationship with.

She does occasionally display an attitude that is appropriate for her age, often acting impulsively and sending those under her servitude into a frenzy.

Sanaki is a potent force offensively; rivaling the best of magic users in terms of sheer power. Her personal tome, Cymbeline, is the second most powerful Fire Tome available with an unparalleled Durability of 45 points. Despite this, Sanaki's offensive potential is crippled by her low Strength; though it does not affect the power of her attacks, it causes most Tomes to Weigh her down considerably, preventing her from performing double attacks on all but the slowest of adversaries, and allowing even moderately swift units to double attack her, which is likely to be fatal, considering her low Defense and HP. Sanaki is capable of attaining an SS-Rank in Fire magic, granting her access to the most powerful of Fire Tomes, the SS-ranked Rexflame (However, Rexflame is also a very heavy Fire Tome (second only to Meteor), and even its +3 boost to Sanaki's Speed hardly negates the penalty for her having such low Strength). Unlike most Magic users, Sanaki cannot use Staves, further inhibiting her usability. On the other hand, Sanaki can attain an S-Rank in all Magic except for Dark magic, allowing her to use a wide variety of Tomes.

Statwise, Sanaki is very powerful but also very fragile when recruited, being capable of dying to a single hit due to her paltry HP and defense, though her HP will develop quickly due to her 70% growth rate in the stat. Assigning her the Shade skill is recommended to offset her low durability, as it gives her much greater chances of avoiding being targeted by enemies during their Phase. Sanaki will also be very slow when recruited due to her paltry base strength causing her to lose Weapon speed from her already low speed; giving her an Energy Drop will lessen the penalties from her powerful personal tome, Cymbeline to just a loss of a single point of attack speed, though this can also be remedied by assigning her Bonus Experience the moment she is available in Part 4 Prologue.

Begnion's Apostle
Empress of Begnion. Known as the Apostle, voice of the goddess. Young but dutiful ruler. Appears in Fire Emblem: Radiant Dawn.

Apostle in White
Empress of Begnion. Known as the Apostle, voice of the goddess. Curiosity led her to participate in a festival about brides. Appears in Fire Emblem: Path of Radiance.

Sanaki elected to guide her people in a world without the goddess, and made treaties uniting the continent.

Sanaki is illustrated in the trading card game Fire Emblem Cipher with the following cards: 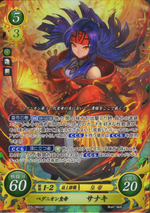 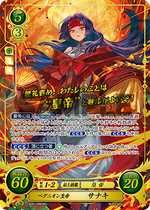 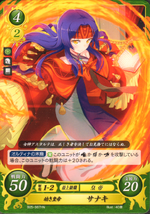 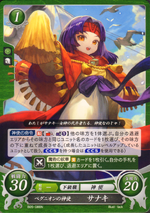 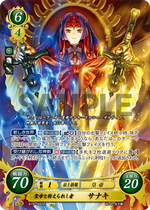 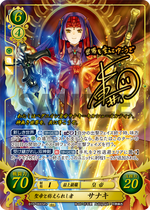 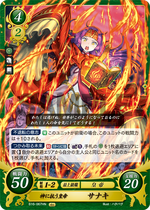 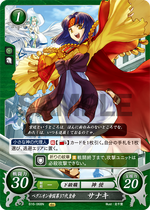 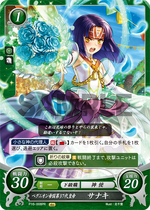 Sanaki's middle name, Kirsch, is the German word for "cherry".