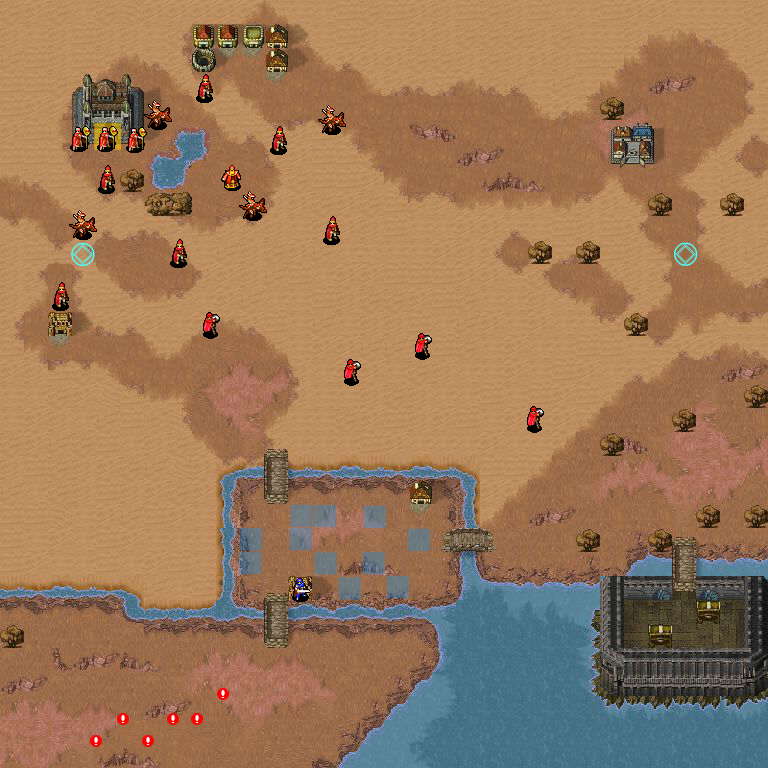 Minerva (Visit the village with Marth)
Etzel (Enemy, talk with Marth, exclusive in New Mystery of the Emblem)

Chapter script
[view]
“Marth barely succeeded in escaping, disembarking in the desert of Khadein. He elected to await his subordinates’ safe arrival. Khadein, the city of magic, is a sanctuary for mages. Many prospecting mages come here and undergo rigorous training. Magic relies on containing nature’s energies in “tomes” and “staves”, freely manipulating these energies to harness great power. A few centuries ago, a lone sage founded an academy here, teaching magic’s secrets. However, instead of bringing happiness, magic was soon used as a tool of war, and a thing to be traded. The sage was disappointed, and vanished from the pages of history. Though there is no confirmation, some say that was the Archsage Gotoh. Currently, advanced magic like Aura cannot be made without the orbs’ power, and their use is restricted to a few chosen ones. Those conditions are set by their creator, and they can only be inherited by those who qualify. Khadein, the city of magic… the proud Sanctuary of Sorcery.”
—Opening Narration, New Mystery of the Emblem

Sanctuary of Sorcery is Chapter 9 in Book 2 of Fire Emblem: Mystery of the Emblem and its remake.

Astram and Heroes will come from the south on Turn 9. Spare him now if you want to recruit him later.

This chapter can be quite difficult if you wish to recruit both Etzel and Minerva because of the heroes who will start advancing from the south after a certain number of turns.

At the beginning of the chapter, send a thief and a flying unit to the east to obtain the items in the chests and eliminate any thieves who might endanger the village. Send the bulk of your force northwards, being careful to not get within the range of too many enemy mages. Marth should be near the front of the line so that he wil be able to speak to and recruit Etzel, since he advances on the first round. After Etzel is recruited, eliminate the other mages and dracoknights as quickly as possible. Meanwhile, have your thief obtain the items in the chests and start moving to the northwest. After recruiting Etzel, send Marth to the eastern village in order to recruit Minerva. A dancer may help to quicken this process.

Since Astram and company arrive around turn 9, it is unlikely that Marth will be able to traverse to the village and back in time to seize the castle without the heroes engaging your forces. However, there are ways to prevent engagement. The heroes will chase after the closest unit, and so you can post a flyer in the middle of the island you start the map on. Once the heroes show up, have the flyer stay out of the heroes' attacking range, and have her move east, eventually out onto the waters. The heroes will enter in the waters in pursuit of the flyer, but having your flyer stay out of reach of the heroes becomes very simple at this point. This allows you extra time to make use of the arena, if you so choose.

Alternatively, you could use the Rescue staff to bring Marth back from the eastern village, or you can have the thief who obtained the boots from the chests to the southeast intercept Marth, and hand him the boots. If Marth uses the boots with this method, then he should be able to make it to the village and back in sufficient time. 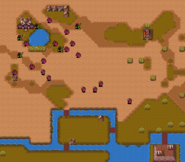