Chapter 16B The Dark Forest or 17A Leonster's Gate

Heather Halley
[view]
“It's such a beautiful voice... And it's calling out to me for help...”
—Sara

Sara is a playable character from Fire Emblem: Thracia 776. 12 years of age, she is a mysterious girl who possesses the ability to use the Kia Staff. Sara's grandfather is the Loptr Church's archbishop and leader Manfroy, whom she despises for murdering her father before she was born.

If Sara is not recruited or if she is defeated during the game, she will become the Deadlord Canis.

Regardless of the route chosen after Chapter 15, Sara is encountered by Leif's army in either Chapter 16B or Chapter 17A.

In Chapter 16B, Sara hears Leif's voice calling out for help as his army is passing through the forests of Melfiye. She responds by leaving her residence to search for him, defying Rinecok's insistence for her to stay put. Salem can speak to Sara while she wanders the battlefield, where she brushes him aside when he attempts to talk to her. Sara eventually finds Leif, where she proclaims that she will help him before introducing herself and revealing her full knowledge of his parentage.

In Chapter 17A, Sara takes up residence in a church near Fort Norden. Anyone can visit the church, where she, upon confirming that they are with Leif's liberation army, will join them unhesitatingly.

Sara then goes on to continue supporting Leif in his cause to liberate Northern Thracia from the Grannvale Empire. She quietly disappears thereafter, although legends say that she lives a peaceful life under Leif's protection.

Dreamy by nature, Sara has a restless spirit, known to wander about of her own accord, taking instructions from no one. Her role in Chapter 16B more than proves this, as she ignores Rinecok's command for her to remain in her residence, leaving to search for the source of the voice she hears calling out to her.

Sara is implied to be gifted with the ability to read people's minds and hearts. This is shown through her Chapter 16B, where she is not just able to hear Leif's unexpressed cry for help, but also possesses full knowledge of his parentage despite not being acquainted with him.

*Only in Chapter 16B

Note: Salem must first speak to Sara in Chapter 16B for this support bonus to be unlocked.

Despite joining fairly late at a low level, Sara is still a very useful unit, as she is the only character able to use the Kia Staff. She also boasts stellar growth rates that allow her to max Magic, Skill, and Speed with ease. Sara is also one of the few characters to have 5 Movement stars, meaning she will get a 2nd turn 25% of the time.

Sara also comes with what is probably one of the best skill combinations in Thracia 776. Wrath allows her to always get a critical on counterattacks, while Prayer increases her chance of avoiding lethal blows. She also has Elite, which doubles her EXP gain to help her gain levels at a fast pace. Sara also gains access to Adept upon promotion.

Sara fills the role of healer very well, starting off with an extremely high Staff rank of B. Since her Staff rank is raised by 1 level when she promotes, she has easy access to all the game's powerful staves, such as Warp, Rewarp, and Rescue. This allows her to be a very useful healer in the endgame chapters, where staves are at their most useful. Her excellent Magic also lets her dodge the effects of status staves used in these same chapters.

Despite her litany of strengths, Sara is not without her weaknesses. She has very low HP and Defense, and even though her Avoid is very high, she is almost guaranteed to die if she fails to dodge enemy attacks or Miracle does not activate. In order to buff up her durability, the Dáinn and Hoðr Scrolls can be given to her. You can also use the Bragi Scroll to help boost Sara's Luck to increase the activation rate of Miracle.

Lady of Loptr
Granddaughter of Lord Manfroy, archbishop and great priest of the Loptr Church. Hates Manfroy for what he did to her parents. Appears in Fire Emblem: Thracia 776.

"Sara quietly removed herself from the public eye after the war. According to several legends, she was placed under Leif's protection, and lived a humble yet spiritually-rich life."

Sara is illustrated in the trading card game with the following cards: 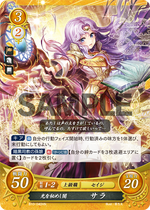 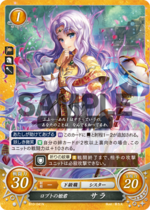 Sara (alternatively spelled Sarah) is a Hebrew feminine given name found in many different areas of the world. In Arabic, Hebrew, and Persian, it refers to a woman of high rank, often simply translated as "Princess". In Modern Hebrew, "sarah" (שרה) is the word for "woman minister".