Damien Haas
[view]
“That I can meet such a beautiful woman... I feel blessed this day.”
—Saul in The Binding Blade.

While he certainly is a faithful priest, Saul has an unconventional personality that hardly befits the cloak. Womanizing with every woman he sees, his actions and words sometimes gets people off-guard, causing his bodyguard Dorothy to remind him not to get into trouble, and her fellow clergy member Elen to think whether he's fit for his job.

Despite that, when he received a mission from Yoder, Saul was seemingly capable to carry out his duty diligently, showing he is merely rough around the edges. He easily realises that Guinivere has the Fire Emblem itself in her possession and confronts her about it, and if he's chosen to face the corrupt Bishop Oro, he shows quite a sharp anger at his abuse of the people.

Minister of Love
A holy priest of St. Elimine. Enjoys spending his time among women. Joining the bridal festival as an observer. Appears in Fire Emblem: The Binding Blade. 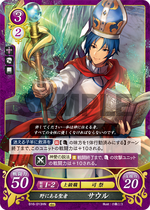 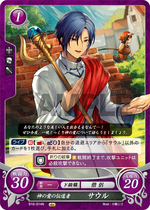