Minae Noji (Credited as Stacy Okada in Awakening)
[view]
“I owe my life to you all, and to my brother...I swear to you and him...I will make the most of it.”
—Say'ri after learning the truth about Yen'fay

Say'ri is a playable character in Fire Emblem Awakening.

Once a princess of Chon'sin, a small nation in Valm, Say'ri lived a happy life until the day Walhart invaded her land and killed her parents. Say'ri was devastated by this event and was shocked when Yen'fay did not seem fazed by it. Say'ri left Chon'sin after her brother decided to ally with Walhart.

Say'ri gathers members to form small resistance across Valm to combat the Valmese army. Say'ri eventually meets The Voice of the Divine Dragon, Tiki. Later, Say'ri is cornered by Walhart's men in Valm harbor, but is rescued by the timely appearance of Chrom's army who had just begun their invasion of Valm. United by their common goal, Say'ri joins the Ylissean forces. Say'ri leads Chrom's army to the Mila Tree where she introduces Chrom to Tiki.

After the victory in Steiger Fortress, Say'ri learns that the diversion forces sent up to the north to Valm as well as the south in Chon'sin were decimated by Walhart and her brother, Yen'fay's armies. Deciding to attack one of the main forces behind the Valm forces, Say'ri and Chrom's army head off to The Demon's Ingle, a volcano. They are greeted by the army led by Yen'fay. Should Say'ri battle Yen'fay, Say'ri declares that she cannot forgive her brother for doing nothing as their country was destroyed by Walhart and as their parents were killed. Most importantly, she could not forgive him for aiding the very man responsible for all of this. After defeating her brother, Say'ri notices that Yen'fay did not fight seriously and was defeated far too easily. Yen'fay is happy to know that Say'ri will be kept safe by her newfound allies, and succumbs to his wounds without telling her why he allied with Valm. After the battle, Excellus warps in to tell Say'ri that Yen'fay allied with Valm to protect her. As long as Yen'fay fought for Valm, they would not kill Say'ri, no matter how much she fought against Valm. Happy to see Say'ri's horrified face after learning the truth, Excellus warps away.

Remorseful for her actions and her past feelings toward her brother, Say'ri resolves to continue with Chrom's army to take down Walhart, once and for all. After Walhart is defeated after a long battle at Valm Castle, Say'ri recovers the Gemstone Vert and gives it to Chrom so he can perform the Awakening Ceremony with the Fire Emblem, now with 4 of the 5 gems. Say'ri accompanies Chrom for the rest of his journey.

In Paralogue 21, Chrom and his army arrive at the Warriors' Tomb, the gravesite for many past Chon'sin warriors. Rumors recently spread that people have seen her deceased brother, Yen'fay there. It turned out that the rumors were true and Say'ri is reunited with her brother, however the Yen'fay at the Tomb is not the same one that was killed at the Demon's Ingle. Say'ri learns that this Yen'fay is one from another timeline, a timeline where she was killed rather than him. Say'ri reveals her enduring guilt for killing Yen'fay in the current timeline while Yen'fay feels the same for letting Say'ri be killed because of his weakness in his timeline. Yen'fay decides to join the army to protect Say'ri this time, when he could not before.

After the war, Say'ri returns to Chon'sin and works alongside others to restore peace to Valm, though she is occasionally seen visiting Yen'fay's grave.

A princess of Chon'sin, Say'ri seems different from the people of Ylisse and has an old fashioned look, which matches her manner of speech. She is willing to explain them to those unacquainted with Chon'sin culture, as shown in her supports with both male and female Robin.

She adores her brother, Yen'fay, though she had fought against him due to not knowing his intentions. She misses her brother dearly, but has trouble coming to terms that he is dead and the one before her is from another world. She also holds a grudge against Excellus due to all the grief he gave her. She is the best skin diver in the army.

Say'ri comes into the game about half-way through the storyline. Luckily her stats are around the same as most of the army at that time as promotion should only have just started by then. She also gets increased starting stats in higher difficulties, thus boosting her power as a unit. Compared to her fellow first generation Swordmaster counterpart, Lon'qu, Say'ri has better defensive growths than him but is slightly lacking in speed and skill, two stats associated with her base class. However, her growths in these stats are still high enough to get a boost in nearly every level up. However, Say'ri is held back due to the fact that she cannot support with as many people as Lon'qu can. She will need to pair up with Tiki or Robin (and Morgan if Say'ri is her mother) to get a Dual Support boost. Say'ri starts off with Avoid +10 and Vantage which can both help her train. After 4 level ups, Say'ri will learn her attacking skill Astra, perfect for her to nail elusive enemies and even pile damage with Killing Edges. At level 15, Say'ri will learn Swordfaire, giving her a good boost in strength due to her strength growth at only 55%, may leave her strength a little low. If Lon'qu has not been used by Chapter 15, Say'ri makes a decent replacement as a Swordmaster counterpart.

Say'ri already starts off with Myrmidon skills, but she can shift into Assassin at Level 10 to acquire some more skills and her Skill growth rate goes up by 5%. She also gains another weapon to use in Bows.

Say'ri's reclass options are the Pegasus Knight and Wyvern Rider classes. As a Pegasus knight class, Say'ri can feel right at home with good speed and skill growths, perfect for her Swordmaster class. Her caps are near identical to Cordelia aside from a slightly lower speed and skill stat in all forms of the Pegasus Knight class. However, Say'ri should not need to be in the Falcon Knight class as Lancefaire is useless outside of this class set and Bride if the player has the DLC for it. Rally Speed and Rally Movement are good if you plan on making her a support unit though. As a Dark Flier Say'ri, will gain Galeforce which is a moderately useful skill for her to clear maps and deal with multiple ranged units if your ranged swords (Amatsu and Ragnell) runs out. Say'ri will need to have some wariness to Archers and Wind Magic in these classes, but with her modest skill, speed, and defensive stats, Say'ri should be just fine.

In the Wyvern Rider line class, aside from speed and resistance, Say'ri's growths are lower than Cherche's. Like the Pegasus Knight class, Say'ri will need to watch for Archers and Wind magic, on top of Wyrmslayers. Nevertheless, Say'ri is a modestly good Wyvern Rider. Say'ri can amass a large number of supportive skills including Lancebreaker and Swordbreaker to become an anti-weapon unit. Lancebreaker in particular will help with Say'ri as a Swordmaster to deal with enemy lance users trying to wear her down. Deliverer and Quick Burn are also utility skills to consider for the final build if the player requires one of these.

Chon'sin's Blade
The upright and dignified princess of the Chon'sin dynasty. She has a direct approach and never forgives a crooked deed. Appears in Fire Emblem Awakening.

Say'ri continues the trend of fast, strong sword infantry, sitting on a neutral 35 Atk and 40 Spd. However, her most curious strength is her Res, sitting at 34 Res, the highest of her unit type combination upon her release. As such, she can take hits from mages, which will factor her combat capabilities with her weapon, and can duel dragons better than most sword infantry units. Her Def is on the lower end and can take moderate damage when dueling physical units. Compared to her closest competition, she is superior in every way to Fir.

Amatsu pushes Say'ri's Atk to a strong 51 and accelerates her special cooldown by 1, thus can charge her specials quickly. It also allows her to counterattack against distant foes as long as she starts combat over 50% health. This in combination with her Res allows her to check and counter mages.

Iceberg is a two attack charging special with Amatsu's acceleration and deals a 17 bonus true damage off of her Res. Say'ri introduced Kestrel Stance 3 boosting her Atk/Spd by 6 when her opponent initiates combat while inflicting a Guard effect, slowing the opponent's special charge. Close Call reduces damage taken from her opponent's attacks and Area of Effect specials based on her stat differences with her opponent and if her Spd is greater than her opponent. This actually makes her deceptively bulky and adds on a Hit and Run effect, moving her one space in the opposite direction if she initiates combat.

Blue units in general deal with her thanks to their color advantage, though mages will need be wary. Firesweep weapons and similar effects such as Dazzling Staff remove her ability to counterattack and allow safe initiations. Firesweeps in general are better as her Def is lower.

Reposition is a must to be able to move allies out of danger and/or place them behind her so she can counter her enemies. Warding Breath further increases her magical bulk if used to check mages and the cooldown acceleration keeps it charged for nearly every round of combat she is involved in. If willing to lose her pseudo-bulkiness, Wrath will further accelerate her cooldowns and add even more true damage. With her high Res, she can effectively run ploy skills, either Speed Ploy or Defense Ploy for the best results.

After returning to Chon'sin, Say'ri worked tirelessly with the other dynasts to secure a peaceful future for the Valmese continent. She was occasionally seen visiting her brother Yen'fay's grave.

Say'ri and Robin
Many wrote of Robin's legendary exploits, but accounts of his origins and character varied. Scholars, poets, and bards agreed on one thing alone—he loved his wife, Say'ri, above all else.

Say'ri is illustrated in the trading card game Fire Emblem Cipher with the following cards: 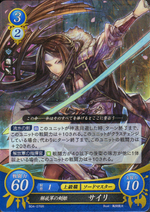 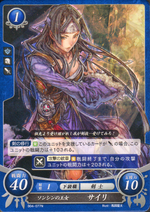 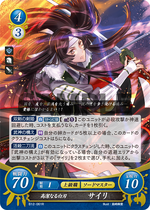 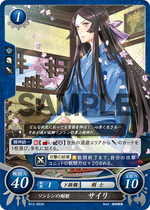