Evan Lewis
[view]
“Larcei, you're crazy! Prince Shannan is still at Aed Shrine, and Oifey hasn't made it back either. It's just us! How do you expect us to take them on!?”
—Scáthach in Genealogy of the Holy War.

Scáthach (romanized as Skasaher in the Fire Emblem Museum and Ulster in Fire Emblem Awakening and Fire Emblem Heroes pre-update version 4.8.0 version) is a playable character from Fire Emblem: Genealogy of the Holy War.

He is the son of Ayra, twin brother of Larcei and cousin of Shannan. His substitute character is Dalvin.

Scáthach is a sword fighter hailing from the Kingdom of Isaach, the son of Ayra, and the older twin brother of Larcei. He was around two years when he arrived the Tirnanog village, where he raised by Edain, Oifey and Shannan, alongside Seliph, his sister and the other children. He doesn't have any memories of his parents.

He is first seen in the opening events of the second generation, in chapter 6 , when he announces that he saw imperial troops near the village and they should be ready to fight. Shannan ordered Scáthach to keep Seliph safe in the coming invasion. Though, against his and Shannan wishes, Larcei, Seliph and the other kids are eager to fight and decide to join the battle to end it more easily.

For the rest of the story, Scáthach fights, as important member of the army, alongside Seliph, Shannan and his comrades to liberate the continent from the Loptr empire.

After Seliph's army defeats the Grannvale Empire, Scáthach will return to Isaach with his lover (provided he does not inherit homeland of any of his possible fathers). If his cousin Shannan is dead, he will assume the Isaachian throne.

Scáthach is protective of the other kids, as exemplified in his interactions with Seliph and Lana. He is the calmer counterpart to his hotheaded twin sister Larcei. From his lovers' conversation with Lana in the final Chapter, it can be gathered that he is a kind-hearted young man, as well as adopting a well-tempered and cautious nature.

Like most of the other characters from the second generation, Scáthach doesn't have a well developed personality, and has very generic lines as a result of sharing conversations with his counterpart Dalvin.

Scáthach is virtually identical to his sister, Larcei, but has growth rates that more closely resemble those of his father. Thanks to his Od holy blood, his Skill and HP will always be fairly good. His Strength and Defense tend to be slightly better unless his father was a magic user, but the difference is for the most part insignificant and all of his stats tend to be good. Like Larcei, he has incredibly competent stats and amazing skills regardless of his parentage, but is held back by his lack of a mount, legendary weapon, or plausible way of attacking at a distance, making him somewhat inadequate, most obviously in comparison to Shannan. This is not to say that Scáthach is a bad unit, but he certainly has his weaknesses.

Unlike Larcei, he does not promote into a Swordmaster, but instead promotes to a Hero. In Fire Emblem: Genealogy of the Holy War, Heroes are essentially inferior to Swordmasters aside from their better Magic stat, so this essentially ensures that Larcei will outperform her brother once both are at level 20 and that she will eventually hit higher caps than he does. Also unlike Larcei, there is no guarantee that he will be able to inherit any weapons at all.

Ultimately, despite his slight disadvantages against Larcei, Scáthach fulfills a virtually identical function. If the player is playing at anything less than a strenuous pace, Scáthach is an excellent way to dispose of enemies without resorting to legendary weapons.

In Chapter 6, Scáthach may speak to Larcei, and she will gain one point of luck.

In the Final Chapter, if Scáthach is in love with Lana, she may speak to him, and he will gain three points of resistance.

Astra's Wake
Wielder of Astra, a secret technique passed on to him from his mother, Ayra. He is the twin of Larcei and cousin to Shannan. Appears in Fire Emblem: Genealogy of the Holy War.

The mangas flesh out Scáthach's personality a little more. In the Mitsuki Oosawa version, in example, he and Larcei are the children of Lex and Ayra, and Scáthach himself has complicated thoughts on his heritage. He deeply loathes his uncle Danann for his horrible actions and the oppression he unleashes on Isaach, but has no enmity towards his cousins (Iuchar and Iucharba, whom he defends from resentful resistance fighters) and holds a deep love and respect of both his late father and the Nál bloodline as a whole.

Scáthach is illustrated in the trading card game with the following cards: 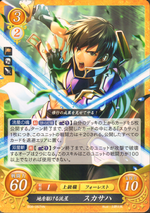 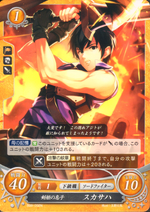 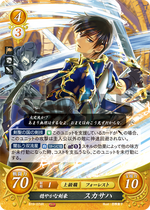 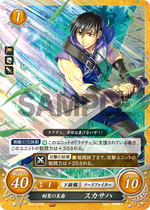 Skasaher is a corruption of Scáthach, a figure in the Scáthach Cycle of Irish mythology. Scáthach was known for training the hero Cú Chulainn, and her name means "shadowy".

Ulster is one of the four provinces of Ireland; it includes the area currently known as Northern Ireland. It also lends its name to the Ulster Cycle of Irish mythology, in which Scáthach features.