A rebel from the Principality of Cheve. She has a pure, lively, freewheeling personality.

After the battle with Camilla in Chapter 13, Scarlet, along with Ryoma and a squad of wyverns, appear and manage to force Camilla and Leo to retreat.

Scarlet is the boss of Chapter 13, she loses and gets mortally wounded to the Avatar's army and later gets put down by Ganz.

Both Scarlet and Crimson are shades of red. 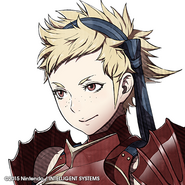 Scarlet's model for My Room.

Scarlet battle model with flower
Add a photo to this gallery