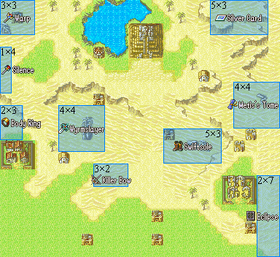 Chapter script
[view]
“Ephraim's sister is in danger. Grado's General Caellach has attacked Jehanna Hall, forcing its surrender. Though Eirika and her troop have left the Hall, Grado's forces pursue them relentlessly. Trapped in the burning desert, enemy forces close in on them from all sides. With no time to wait for Frelia's troops, Ephraim leaves for Jehanna immediately. He must go to his sister's aid.”
—Opening Narration (Ephraim's Route)

Scorched Sand is Chapter 15 of Fire Emblem: The Sacred Stones. It is the chapter where Eirika and Ephraim's routes merge.

This is the first and only chapter to include desert tiles. As Seth states in the starting dialouge, the sand will greatly impede many units; heavy and cavalry-based units will get bogged in the sand, barely moving at all. Foot units will have their movement slightly reduced, but not as bad as heavy and cavalry-based units. Only fliers and magical units (barring horse-mounted ones) have normal movement.

There is treasure scattered throughout the map, which can be randomly found through luck. However, if a Thief or Rogue stands in on those tiles, the item is found instantly. It's recommended to search for the treasure when most of the map is cleared, only obtaining them if they're in your way.

Regardless of the path you take, it's recommended to attack Caellach and his forces first, as they are nothing compared to what Valter has. Caellach is only armed with axes, so it's recommended to use a sword or axereaver unit to dispatch of him. Caellach carries the Hoplon Guard, which prevents him from taking critical hits while he has it in his inventory. Colm or Rennac can steal the Hoplon guard from Caellach and make him vulnerable to criticals, but his fairly high luck will hamper the chances of that happening.

On Eirika's route, Ephraim, Duessel and Knoll will appear on from the south-west on turn 2. On Ephraim's route, Eirika, Innes and Saleh are already on the map.

Once Caellach falls and the reinforcements stop coming, make your way towards Valter's group. Be wary of the Berserker in the north-east, who carries a Dragon Axe. Bait him into using his Hand Axe, so that he drops the Dragon Axe instead. On Ephraim's route, one of the Troubadors will be carrying a Berserk staff; on Eirika's, this is changed to a Sleep staff instead. Regardless, you should still be wary of the Berserker carrying the Devil Axe and the Shaman with Eclipse.

Once all the units near Valter are cleared, engage him. As he only has lances, use an axe or lancereaver wielding unit. As he is a Wyvern Knight, he has the ability Pierce, which if activated, allows him to ignore enemy defenses and deal full damage if he hits. He also carries a Fili Shield, which grants him immunity from the bonus damage from bows. Like Caellach's Hoplon Guard, this can also be stolen, though it's best not to do so and risk losing Colm or Rennac in the process, as he has a Killer Lance on the side.

*Denotes an item dropped upon defeat
**Drops the unequipped weapon