Horseman
[view]
“We have to remind Coyote of the day we swore allegiance to him. No matter how painful it may be... That is our only recourse. I never wanted to believe it would come to this...”
—Sedgar to Wolf in New Mystery of the Emblem.

Sedgar is a playable character from the Archanea Series of Fire Emblem. Originally a member of the Aurelian Knights serving under the banner of Hardin in Shadow Dragon and the Blade of Light, Sedgar, following the end of the War of Darkness, joins the Wolfguard as its second-in-command, an elite force assembled by his fellow comrade Wolf. Within the Wolfguard, Sedgar is particularly close to Wolf, who considers him to be his "assistant" on the battlefield.

A member of the people residing in the plains of Aurelis, Sedgar was captured and made a slave to the aristocracy. He was, along with his fellow kinsmen, later liberated when Hardin assumed the leadership of the country from the former King of Aurelis.

Some time after being freed from slavery, Sedgar, alongside Roshea, Vyland and Wolf, made a collective vow to devote their lives to serving Hardin, thereafter swearing fealty to him.

By the time the events of Shadow Dragon and the Blade of Light come around, much of Aurelis has been dominated by the Dolhr Empire. Hardin, leading the rebellion army opposing the Dolhr Empire, refuses to bow down to the enemy, gallantly executing his duties without falter. Sedgar, alongside his fellow subordinates, including Roshea, Vyland and Wolf, bravely elects to maintain his loyalty to his liege by continuing to struggle by his side. As Marth's army approaches the Northern Fortress of Aurelis in Chapter 5, on Hardin's exuberant command, Sedgar heads out with his comrades in order to rendezvous with it. Having been reinforced by the might of Marth's army, the knights of Aurelis are able to successfully purge their country of Dolhr's presence. Wolf, under the order of his liege, proceeds to aid Marth in bringing the War of Shadows to a conclusion with his comrades thereafter. Following the end of the war, after the elite Wolfguard is set up by Wolf, Sedgar joins its ranks alongside Roshea and Vyland, pledging to fight for Hardin and reinforce his ideals unquestioningly.

Sedgar reappears in Chapter 18 of Book 2 of Mystery of the Emblem, where he, alongside the rest of the Wolfguard, is commanded by Wolf to ambush Marth's army as it attempts to pass through the Adria Pass and gain access to the palace of Archanea. After Marth parleys with the King of Aurelis in a village located in the vicinity, however, the ambush is called off, and the Wolfguard is instructed to retreat.

After retreating from the battle of Adria Pass, the Wolfguard, with the exception of Roshea, makes the joint decision to head over to Archanea and bolster the main force of its army, intending to protect Hardin from the impending assault of Marth's army in Chapter 19. Amongst the group of four comprising the Wolfguard, Sedgar is the second to be convinced to defect to Marth's army after an emotional exchange with Vyland, during which he reveals that he has consciously turned a blind eye to his liege's heinous tyranny for the sake of maintaining his loyalty to him, thereafter resolving to make amends. Sedgar then helps Marth to defeat Hardin in the next chapter and thereafter draw the War of Heroes to a conclusion. Following this, Sedgar assumes the helm of the Wolfguard after Wolf withdraws out of depression, intending to continue upholding his late liege's ideals.

Like a majority of the cast appearing in Shadow Dragon and the Blade of Light and Mystery of the Emblem, Sedgar's personality is not very well developed due to the minor role that he plays in both games. Through the few interactions that he has with other characters, however, it is still possible to deduce various traits that define his character.

Similar to many other knight characters appearing in Shadow Dragon and the Blade of Light and Mystery of the Emblem, Sedgar is passionately loyal to the liege that he serves, although his loyalty is one that is of an acutely extreme quality; in a bid to uphold the pledge of allegiance he has sworn to Hardin, he is more than willing to overlook the crimes that his liege has wrought upon the continent under the Darksphere's influence. His response to Roshea in Chapter 18 after the latter expresses woeful doubt over the allegations that posit Marth as a man of diabolical ambitions proves as much, as he passionately proclaims a belief that Marth intends to destroy the entire continent of Archanea.

Sedgar later proves to be far less irrational than he is initially portrayed; his belief in Marth's deceit, for one, is faux, as he later, in his recruitment conversation with Vyland in Chapter 19, disputes it by acknowledging the fact that he has been deliberately turning a blind eye to his beloved liege's lapse into insanity.

Additional dimensions are added to Sedgar's character through his base conversations with Kris in New Mystery of the Emblem. For one, it may be observed that Sedgar has a penchant for weapon maintenance, as he meticulously performs a wide range of tasks that include keeping stock of the army's weapon inventory, organising the equipment and repairing defects. Through Sedgar scrutinising attention to detail, one can also perceive him to be a highly adaptable person; although he once exclusively specialised in bow maintenance, he came to expand his skill to other weapon type in order to keep pace with Wolf's growing weapon versatility.

Sedgar, along with his companion Wolf, is one of the most unusual units in Shadow Dragon. His bases for a prepromoted unit are extremely bad, to the point of being on par with level 1 unpromoted units like Cain. However, he distinguishes himself by being a close second only to Wolf in possessing the highest growth rates in the entire game by far. His growths are often more than double those of other characters, and as a result, a maxed-out Sedgar has fairly similar stats to a maxed-out unit starting unpromoted. This also allows Sedgar to pick up fairly reliable growths in otherwise uncommon stats, like Defense. Compared to Wolf, Sedgar is considered very slightly better, as he has more room to grow and his Defense growth is higher, but they can largely be used interchangeably.

Sedgar's other strong point is his status as a prepromote, which allows the player to access promoted class lines very early in the game. While Horseman's class bases are fairly low, other classes, notably Hero and General, possess significantly better class bases, which should make Sedgar competitive with the rest of the squad. General in particular is a very good choice, as its massive 15 base Defense will make Sedgar mostly invulnerable to normal enemies in early maps, even on Merciless Mode. What is more, it ups Sedgar's Defense growth to 110%, meaning he will always gain it on levels, allowing him to maintain his durability to the endgame. One of the most popular places to train him is Port Warren, where, if warped to one of the northern forts, none of the normal enemies can harm him, allowing him to level simply through chip EXP. Once he has gained sufficient Defense, he can stay a General for the pure durability, or become a Hero, which provides him with a much better Speed base. On Merciless, characters who can actively take more than one hit without dying are highly valued, making a tank of a unit like Sedgar very helpful.

All that said, Sedgar is flawed. He is a very poor performer if not reclassed, and as a prepromote, he gains EXP quite slowly, meaning the player must actively train him to see his full potential. What is more, he has no weapon ranks whatsoever, and his preferred classes of Hero and General do not share weapon types. He has enough brute power when trained to get by with iron weapons, but this can still prove a nuisance. Lastly, Sedgar will be largely useless in faster playstyles (such as those making heavy use of Warp). In more casual settings, though, he will often be a lifesaver.

Sedgar appears in the final quarter of the game, sporting substandard base stats for a pre-promoted level 10 unit. His growths, while high, do little to offset his slow start and lack of availability. On higher difficulties, he is very likely to die to any enemy.

You... Why are you attacking other countries?! Have you been blinded by ambition?!

Vyland: Sedgar, hold on. It's me, Vyland.
Sedgar: What's the meaning of this, Vyland? Don't tell me you've defected!?
Vyland: Listen, Sedgar. I--I don't know. What am I supposed to do? I loved Coyote like a brother. All I wanted was to fight for him. But... But he has changed for the worse. It's as though he's someone else now...
Sedgar: ......
Vyland: I wanted to serve him, always. That's why I've been turning a blind eye. I shut myself, trying to remember the Coyote who loved us so long ago. It really hurt to face the truth. That Coyote's not who he used to be... I just don't know anymore. Hey, Sedgar... What the hell am I supposed to do?
Sedgar: Vyland... I too... I feel the same way. I know he's gone insane, but I looked the other way and blocked my senses. One day, he'll go back to being our Coyote... That's what I kept telling myself.
Vyland: Roshea has gone over to the Alteans. I cannot fight him. Sedgar, you should come too. I don't know what's right anymore. But I don't want to fight you, either.
Sedgar: Yes... Even though Coyote's madness was clear to me, I did nothing. I have to make this right.

"He remained with the Aurelian Knights, and worked tirelessly to restore the nation."

"Sedgar remained a knight of Aurelis. He helped rebuild, and later became vice-captain and pillar of the Wolfguard."

"Sedgar left for Aurelis after the war. Embracing the ideals of the departed Hardin, he continued to fight with the Wolfguard."

Sedgar is illustrated in the trading card game Fire Emblem Cipher with the following cards: 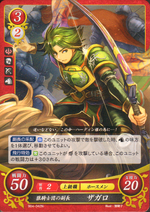 In spanish and portuguese, "zagalo/zagal" means "shepherd, young man". With his friend Wolf, he can be a reference to the Aesop's fable "The Wolf and The Shepherd".

Official artwork of Sedgar, Wolf, Roshea, and Vyland from The Complete.

Sedgar, as he appears in the fifth series of the TCG as a Level 10 Horseman.

Sedgar as a Horseman in Fire Emblem 0 (Cipher).

Sedgar's portrait in Shadow Dragon and the Blade of Light