Selena redirects to this page. For the Fire Emblem Fates character, see here.

Tiana Camacho
[view]
“Yes, understood. Your Majesty, I...would like to renew my oath of service to you here today. I pledge that I shall never again falter in my duty to you or to Grado. I beg your leave, my lord.”
—Selena renewing her service to Grado in The Sacred Stones.

Selena is an enemy character in Fire Emblem: The Sacred Stones known as the Fluorspar. She is one of Grado's six Generals.

As a child, Selena was raised in a poor, impoverished city. The citizens of the town were so poor as to be unable to support themselves. When winter approached, many considered horrible options in order to feed themselves. However, Emperor Vigarde personally sent provisions to the town, and saved the population of the city even though they were unable to pay their taxes. This act of kindness so touched Selena that she went to the Imperial Capital to join the army, which would lead to her eventually becoming a knight.

During the game, Selena is first seen in Chapter 2. Here, the general is witness to a bandit attack on a town. Princess Eirika of Renais comes to the rescue of the town, and Selena, thinking the Princess is a mercenary, hires Eirika to help the citizens.

Later, Selena is assigned to destroy Frelia's Sacred Stone along with General Caellach. After the Stone is destroyed, Caellach kills a helpless Frelian soldier, which causes Selena to reprimand him. After her return to the Capital, Selena witnesses General Duessel arguing with Emperor Vigarde over the morality of the war between Grado and Renais. After Duessel leaves to capture Prince Ephraim, Selena is told to bring her own detachment and kill Duessel for being a traitor to the country. Selena is appalled at first and she herself questions the Emperor's judgment, but leaves to complete her mission.

When Selena next meets with Duessel, she condemns him as a traitor, and moves to kill him. Before she can start, however, General Valter appears, and tells Selena that the Emperor is suspicious of her actions as well, and he has been told to replace her on this mission. Selena complies and returns to the Imperial Capital. In order to regain her lost honor, Prince Lyon tells Selena to retrieve a dragonstone for him. Selena vows to never question the Emperor again, and sets off to Za'albul Marsh.

When she arrives, Selena meets with Myrrh, who asks for her dragonstone back. Myrrh then tells Selena how the wave of dark energy emanating from Grado changed Vigarde completely. After their meeting, Selena lets Myrrh free as she prepares to battle with Ephraim. After her death, Myrrh regains her dragonstone.

Selena is a charming and polite general. She keeps peace with her fellow generals and bears an unwavering loyalty to the Grado throne. She is easily saddened by the suffering of others, and regrets watching Renais fall into chaos. Due to her village being saved by Vigarde despite the inability of her people to pay their taxes, her sense of duty to the throne is unshakable even through evidence of corruption, a character trait that eventually leads to her demise.

During the War of the Stones, it is shown that she's extremely loyal to her Emperor, at the cost of ignoring her own opinions and feelings.

* Only in Creature Campaign

Selena is unlockable as a secret character after going through the Tower of Valni three times in Creature Campaign. She appears with the same stats and weapons as before, though she now has the Recover staff in her inventory. Despite having low bases for her join time, she has solid growths, though her few levels of growth severely limit her potential.

*25% in the Japanese version

Fluorspar
Commoner from out of a desolate village who used her magic ability to become the Fluorspar of the Imperial Three. Appears in Fire Emblem: The Sacred Stones.

Selena is a Blue Tome Cavalry mage who is easily one of the strongest mages in the game due to a rather impressive statline that is built for all-out offense. A 39 Atk and Spd stat immediately pushes her to dish out constant double attacks agains a wide plethora of units with solid damage behind it. While she has modest HP at 40, both her Def and Res do not provide her with any bulk that makes it safe for her to be left out in the open and vulnerable. All-in-all, Selena is a powerful glass cannon and her Tome makes sure that she can perform this to near perfection.
Tome of Storms grants her an innate +3 Spd, bringing her neutral to 42 and with a Spd Asset, she can reach 46. If her foe is over 75% HP, she gains Atk/Spd +5 and essentially a Null Follow-Up effect. This will help her ensure that she double attacks the enemy and also prevent her foe from doing the same.
Rally Atk/Res+ allows her to give Atk/Res+6 to an ally that she uses it on. Life and Death 4 perfectly syncs with her stats, bringing her default stats to an incredible 60 Atk and 49 Spd. While she suffers a -5 drop to her Def and Res to a pitiful neutral 11 and 18, there are only a few more units that now can outright finish her off than without the skill, thus giving her more incentive to run this skill as the payoff greatly outweighs the downsides. Attack Resistance Ruse causes all enemies within the cardinal direction of her and the ally she uses a Rally skill on to suffer an Atk/Res-5 penalty and also are inflicted with Guard, slowing their special cooldowns.

Selena's bulk overall leaves her vulnerable to any enemy who can get to her first. Very few units can safely bait her out without sustaining heavy damage aside from Fallen Leon, Brave Edelgard, Brave Ike who can mitigate her damage while also having color advantage. The Leon and Brave Edelgard innately has the ability to counterattack though Edelgard loses her ability to perform her skill's guaranteed follow-up. Brave Ike must inherit Distant Counter. While overkill, cavalry slaying weapons are instant killers with Brave Micaiah having solid enough Res plus color advantage to possibly bait her under the most ideal circumstances.

Emphasizing Selena's strengths are her best options and luckily her kit already has the best possible Skill A. Glimmer allows her to take the bonuses given to her and unleash truly devastating damage with the right allies. Replacing her Rally skill with a positional skill like Reposition gives her slightly better utility than the boost from the Rally skill which other units can do through better support skills. Windsweep is an excellent pairing as her Spd will ensure that it activates over nearly every unit in the game aside from units that carry Null C-Disrupt. Skill C is flexible to run a host of skills like Attack or Speed Wave skills, Pulse Smoke, Attack or Speed Joint skills, and Cavalry skills, especially Hone Cavalry if used on a pure Cavalry team.

Sandbar Fluorspar
One of the Grado Empire's six generals, known as the Fluorspar. Her loyalty is unwavering, even under the summer sea's waves. Appears in Fire Emblem: The Sacred Stones.

Debuting before her default form, Summer Selena is a Green Tome Cavalry unit with highly optimized stats for player turn offense. 37 Atk and 37 Spd allows Summer Selena to hit moderately hard and can score follow-up attacks against a decent number of units. Unfortnately she suffers from abysmal overall bulk that leaves very units that she can safely take a hit from without immediately falling to them. In the right hands, Summer Selena has extremely explosive power that can effectively demolish enemies.
Exotic Fruit Juice grants Summer Selena an innate +3 Atk on top of its 14 base might, bringing her neutral Atk to a moderate 54 Atk. During combat, Summer Selena inflicts Spd/Res -6 on foes within two spaces of her. Selena can push her ability to double attack on her foes especially if she has her +4 Spd asset, thus meaning that any foe below 38 Spd will be double attacked by her (42 with a Spd asset), which encompasses a huge variety of possible unmerged enemies.
Draw Back allows her to pull an ally one space backwards, which is a solid assist skill as she should keep her ally in front of her to take damage for her. Atk/Spd Push 4 grants her Atk/Spd +7 so long as she starts a battle above 25% of her maximum HP. While she does take 5 non-lethal recoil damage if she attacks, this plays nicely into aa possible inherited skill and the boost further increases the units she can double attack against. Speed Resistance Snag causes the nearest foes within four spaces of Summer Selena with a Spd/Res-4 penalty. While targeting the correct unit with this skill may be a bit awkward and tricky to get right, in the right situations, this can help her secure her kills on to her foes.

Summer Selena suffers from her incredibly low bulk which in all likeliness allows nearly all units to immediately destroy her if they can attack her first, thus she needs to avoid being left open during her enemy phase. Cavalry slaying units like Micaiah and her various forms or Brave Lysithea, while not completely necessary, demolishes her in a single hit.

Luna or Glimmer make decent inheritance for her as the slight Res ignoring effect of the former or the damage boost from her buffs of the latter ensures that she can launch incredibly powerful attacks agaisnt some of the moderately bulky units she can face. With the recoil of Atk/Spd Push 4, she can easily put herself into the damage threshold of Desperation to ensure her follow-up attack occurs before her foe can initiate combat. Skill C is flexible enough to run skills that either benefit her and her allies like Atk/Spd related Wave and Joint skill or support her fellow Cavalry units through skills like Hone Cavalry.

Selena is illustrated in the trading card game Fire Emblem Cipher with the following cards: 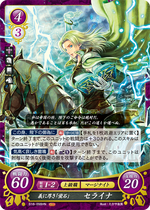 Selene is the Titan goddess of the moon. In Greek mythology, Selene was an archaic lunar deity and the daughter of the Titans Hyperion and Theia. In Roman mythology, the moon goddess is called Luna, Latin for "moon". Her title, Fluorspar, is another word for fluorite.