∞
[view]
Selena's Blade (ルーナの鋭剣 Rūna no Eiken, lit. Luna's Sharp Sword) is a Sword that is introduced in Fire Emblem Fates. Eponymously named after Selena, Selena's Blade bears fairly high Might and a boost to Critical hit, although this comes at the cost of its wielder's ability to dodge and perform double attacks being reduced. 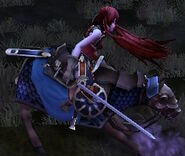