Seliph (セリス Serisu, translated Celice in the Japanese version and Serlis in the official website for Fire Emblem: Rekka no Ken), full name Seliph Baldos Chalphy (セリス • バルドス • シアルフィ), is a playable character from Fire Emblem: Genealogy of the Holy War and a non-playable character from Fire Emblem: Thracia 776. He is the son of Sigurd and Deirdre, and was chronologically born in Agustria, between Chapters 2 and 3 in the events of Genealogy of the Holy War. He also appears as a DLC character in Awakening, wherein he was illustrated by Suzuki Rika, the illustrator of the Fire Emblem: The Sacred Stones novels in Japan.

Seliph is also the paternal grandson of Vylon, nephew of Ethlyn, the nephew-in-law of Quan, the first cousin of their children Leif and Altena, and a distant relative of Oifey.

He is the descendant of Baldur on his father's side and of Heim and Saint Maira on his mother's side.

Seliph was born in Agusty during the Grannvale Kingdom's occupation of Agustria, Chagall's uprising in Madino and Silvail. Deirdre made the decision to leave Agusty to join her husband after Madino Castle was conquered. She was captured by Manfroy, robbing Seliph of his mother for the rest of his life. Later on in Chapter 5, after the subjugation of Lubeck in Silesse, Oifey and Shanan were entrusted with the task of bringing Seliph to Isaach, which was considered a safe haven at the time.

In Thracia 776, specifically in the opening scene of Chapter 21, Seliph makes a minor appearance, in which he re-assures Leif to entrust Conort into his army's care, allowing Leif's troops to head for Leonster in the meantime.

Seliph's army soon expanded in size, as it was reinforced by Johan/Johalva, Arthur/Amid and Fee/Femina. This gave Seliph enough strength to defeat Danan at Rivough and free Isaach from his clutches. Lewyn then proceeded to tell part of Sigurd's past to Seliph before making the suggestion for the army to join up with Shanan and Leif.

Meeting up with Shanan at the Yied Shrine, Seliph's army gained yet another member, a thief who goes by the name of Patty/Daisy. After breaking through Ishtore's forces at Melgen and a surprise attack by Darna, Seliph's army set foot upon Alster. His forces proceeded to assist Leif, Nanna/Janne and Finn in driving Bloom out of Alster's borders, with the army further aided by Ares, Leen/Laylea and Teeny/Linda.

Seliph's army was soon forced into another battle with the Freeges, as Bloom sent out two armies to wrest Lenster and Alster from Seliph and Leif's control. Despite the odds against the army, it managed to kill Bloom and subjugate Conote.

The Thracian army then attacked Manster, where Seliph's army rushed to the aid of the fleeing citizens and Ced/Hawk, managing to conquer Manse in the process.

During the war against Thracia, Seliph's ranks were further boosted by Hannibal, Corpul/Sharlow and Altena. After subduing the Kingdom of Thracia, Seliph set his sights upon Grannvale, the land of his forefathers. As the army entered the district of Miletos, Julia disappeared without a trace.

En route to Chalphy, Seliph's army engaged in a battle with Julius and Ishtar. The duo would eventually pull back from the battle as either one is defeated by the army. As the army proceeded across the bridge leading into Chalphy, several dark mages were seen to pursue a bishop and a group of children. Seliph pursued the mages, managing to slay them and rescue the fleeing group. The bishop then gave the holy sword Tyrfing to Seliph.

Seliph faced off against Arvis in the castle of Chalphy and managed to emerge triumphant after a long battle, finally avenging his father's death. As he stopped by a shoreline near the castle, Seliph met his parents for the first time in his life. A heartwarming conversation resulted from this meeting, where Seliph learned the truth behind Arvis' actions: he had been manipulated by the Lopto Sect from the start. Seliph then received a Life Ring as a farewell gift from his parents.

Seliph is then made aware of the task that lay ahead: he had to face off against the dukedoms of Grannvale and their vast armies in order to unify it. Lewyn told him the story of the previous war, where Seliph learnt that he needed Julia to end the horror plaguing the continent. As his army neared the land of Belhalla, it was revealed that Julia had been, much like her mother before her, brainwashed by Manfroy into attacking the Liberation Army. Seliph issued orders to hold off attacking Julia, as he, alongside a few members of his army, headed to Velthomer to end Manfroy's life.

After successfully defeating Manfroy, Seliph brought Julia back to her senses. He then brought her to Velthomer in order to unlock the Book of Naga. With the Book of Naga, Julia managed to defeat Julius, sealing away the evil of Loptyr for good. Seliph was crowned the new emperor of Grannvale, bringing peace back to the continent once again.

*When Seliph is first recruited, his Leadership is 2. To increase Leadership to 3, save the game and then reset. Loading the save will reveal that Seliph's Leadership is now 3.
**Except Tyrfing

Seliph may start off with low bases (except in luck), but he has some of the best growth rates, as well as the Pursuit and Nihil skills, which help in the fight against Julius.

It is recommended to have Seliph inherit Sigurd's silver sword to make up for his low starting strength, the Elite Ring to help him gain levels faster, and possibly a Speed Ring, as his speed growth is rather low. In turn, his skill growth is one of the better growths in the game, but this, along with his speed, is not helped by the Knight Lord's low skill and speed caps, though this is partially fixed when Seliph obtains the Tyrfing. On the contrary, his magic and resistance growths are quite superb for a physical unit, with 30% in each. He also has an unusually high starting luck stat and decent growth; despite not having Ulir blood, he will most likely cap it (or get close).

To sum up, Seliph is like Leif and Raquesis: they look weak, but they turn into some of the most powerful characters in the game; Seliph and Leif in particular due to item inheritance.

(Only conversations which result in stat gains, items, or recruitment of specific characters are included in this list.)

In Chapter 6, after Isaach Castle is captured, Julia may speak to Seliph to obtain the Resire tome. This will result in Julia not being able to obtain the Aura Tome.

In Chapter 6, after Sophara Castle is captured, Julia may speak to Seliph to obtain the Aura tome. This will result in Julia being unable to obtain the Resire tome.

In Chapter 6, after Sophara Castle is captured, Seliph may speak to Lana, resulting in her gaining three points of HP and 100 love points with him.

In Chapter 7, if Seliph speaks to Shanan, he will gain one point of Skill.

In Chapter 7, if Patty speaks to Seliph, he will gain a Brave Sword and 100 love points with her.

In Chapter 8, if Julia speaks to Seliph before Ishtar makes her appearance, he will gain one point of Luck.

In Chapter 8, after Conote Castle is captured, Seliph may speak to Teeny, resulting in her gaining three points of HP and 100 love points with him.

In Chapter 8, if Seliph speaks to Ced, Ced will be recruited into the army.

In Chapter 8, if Lewyn is Ced's father, Ced will thus be able to strike up a conversation with Seliph, in which he will gain three points of Luck.

In Chapter 9, if Seliph speaks to Altena, she will be recruited into the army.

In Chapter 9, after Grutia Castle is captured, Julia may speak to Seliph, resulting in him gaining three points of Resistance.

In Chapter 10, Shanan may speak to Seliph, resulting in him gaining three points of HP.

In Chapter 10, after Chronos Castle is captured, Oifey may speak to Seliph, and Oifey will gain three points of HP.

In Chapter 10, if Seliph speaks to Palmark, he will gain the Tyrfing.

In the Final Chapter, if Teeny is Seliph's lover, she can talk to him, and Seliph will gain three points of magic.

In the Final Chapter, after Edda Castle is captured, if Nanna is Seliph's lover, she may speak to him, resulting in him gaining three points of HP.

In the Final Chapter, after Dozel Castle is captured, if Lana is Seliph's lover, she may speak to him, resulting in him gaining three points of Resistance.

In the Final Chapter, after Dozel Castle is captured, if Larcei is Seliph's lover, she may speak to him, resulting in him gaining three points of Strength.

In the Final Chapter, after Manfroy is defeated, Seliph may speak to Julia to re-recruit her.

The transliteration of Seliph's Japanese name, Celice, can also be read as 'celes', the first five letters in the word 'celestial'.

The name Seliph may come from Seraph, a type of celestial or heavenly being in the Abrahamic religions. 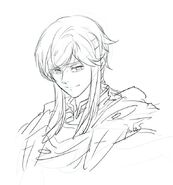 Official artwork of Seliph from the Super Tactics Book.

Official portrait art of Seliph from the Thracia 776 Illustrated Works

Seliph as he appears in the Nea Fuyuki manga adaptation.

Sigurd and Seliph in promo art for Fire Emblem 0 (Cipher) by Rika Suzuki.

Artwork of Seliph, Leif and Ares by Rika Suzuki (in celebration of the 20th anniversary of Genealogy of the Holy War)

Seliph, as he appears in the first series of the TCG as a Level 1 Junior Lord

Seliph, as he appears in the Promotional series of the TCG as a Level 1 Junior Lord.

Seliph, as he appears in the first series of the TCG as a Level 10 Junior Lord.

Seliph, as he appears in the Anthology series of the TCG as a Level 15 Junior Lord.

Seliph, as he appears in the third series of the TCG as a Level 20 Knight Lord.

Seliph as a Swordmaster in the One Hundred Songs of Heroes Karuta set.

Seliph's portrait in Genealogy of the Holy War.

Seliph's Avatar Logbook image as it appears in Awakening.

Seliph as a Junior Lord