[view]
“You don't like playing?! Playing is great!”
—Selkie in her support with Velouria

Selkie is a playable character in Fire Emblem Fates. She is the daughter of Kaden.

Like the other children of Fates, Selkie was raised in her own Deeprealm world.

In her Paralogue, she is busy chasing birds when she walks through the gate out of her Deeprealm and ends up in the normal world. She is then encountered by Daichi and is surrounded by his group of bandits, hoping to capture her since she is a kitsune. Unfortunately, she does not fully understand the situation and thinks they are playing with her. Kaden, who was on his way to see her, catches wind that Selkie is in trouble and races off to rescue her from the bandits. After "playing" with the bandits, Selkie reunites with Kaden who tells her about her situation. Selkie apologizes, but Kaden convinces her to play a new game, "Hunt the Humans". After taking down the poachers, Selkie still does not get that the poachers were trying to capture her and kill her, but Kaden is nevertheless relieved to see her safe. Enjoying the "game" she played, she asks Kaden if she can join the army so she can continue to play. Kaden tells her that war is not as fun as she thinks and Selkie apologizes for getting carried away. However, since the army saved her, she wants to return the favor by fighting with the army, a sentiment that Kaden is proud of.

Cheerful and innocent, Selkie grew up never facing the harsh reality of being a Kitsune or being hunted. She is active and hates standing still, never turning down any situation that could lead to fun play, even against the resistance of others. Despite inherent risks of her games and ideas, she is the most fearless member of the army, which also makes her a formidable opponent in battle due to the fact that Kaden told her to treat battles like a game, so she gives it her all.

She chooses to focus on the enjoyment of her activities rather than the potential of getting hurt, which even then she brushes off if she is aware. She can be stubborn as well as any boring suggestion to her is immediately met with a pout and quickly request a more fun option from that person.

Selkie can be best described as a girl who "leaps before she thinks", such as in the case of Forrest where she recklessly destroys a prized scrap of fabric with scissors before he could explain to her what he wanted to do with it. Despite Shigure's warning to not glide with a sailcloth on a particular day, Selkie does so anyways and inadvertently puts herself in danger due to a rogue gust. She is quick to learn lessons and to heed warnings of others, though usually after the fact.

Like her father, Selkie feels the need to repay someone when she feels that she owes them a favor. This is shown in Forrest's support where she turns the mangled fabric into a soft pillow as an apology and as thanks for teaching her how to sew. She grew up in a Deeprealm without any Kitsune so she is excited to visit her father's home at the Kitsune Hamlet once the war concludes, hoping to play with her fellow Kitsune.

Base Stats (Before Inheritance)[]

* Selkie will receive whatever secondary class that Corrin has access to if she has achieved an A+-Support with Kana.

*Selkie will receive whatever secondary class that Corrin or Kana have access to if she has achieved an S-Support with either of them.

Selkie proudly enters Heroes as a blue cavalry beast unit alongside her fellow Fates beast shapeshifters, including her father. Her combination gives her excellent synergy on beast teams and excellent movement, making her a looming threat. While her Atk is not exactly the highest, sitting at neutral 29, she is incredibly fast at 38 and has solid magical bulk with a score of 70 split evenly between her Res and HP. Her physical bulk is extremely low, thus she is not designed to sustain hits. Selkie shines as a Mage check and can effectively duel dragons as a result, but most importantly, her damage output is deceptively stronger that she appears against close-quarter enemeis.
Foxkit Fang grants Selkie a bonus 3 Res, bringing it to 38 and if she is only adjacent to a beast/dragon units or not adjacent to any ally, she transforms, gaining +2 flat Atk and if she initiates combat, she inflicts Atk/Def -4 and her opponent loses the ability to perform a follow-up attack. Additionally, if her Res is greater than her opponent at the start of combat and her opponent uses a close-quarter weapon, her stats improve by 50% of the difference between each individual stat with a maximum of 8 for each individual stat. Selkie is incredibly strong under the right conditions and opponents can find themselves suddenly on the receiving end of a deadly assault if she is underestimated.
Iceberg is a natural fit for a special as the quick cooldown Res reliant special can result in 19 true damage added to her attack without factoring any boost from her weapon alone. Attack Speed Bond increases her Atk/Spd by 5 if she adjacent to an ally. Unfortunately this is great for when she is on Beast unit teams only as the player has to constantly adjust her ally's positioning after to maintain her transformed effect if using her on a mixed team. Sabotage Attack causes any enemy who is adjacent to another enemy to lose -7 Atk if they have at least three less Res than Selkie at the start of her turn. While a powerful debuff, it requires a very specific enemy formation to utilize, thus it has inconsistent activations. Even Resistance Wave increases Selkie and her adjacent allies Res by 6 at the start of even numbered turns, perfectly synching with her weapon.

Selkie can be a victim of bad team set-ups as she is strong without her full weapon effect, but it is also the main means for her to outperform her enemy so losing it is a huge flaw for her. She is also much weaker on her opponent's turn as Foxkit only activates the debuff when she initiates combat. Regardless, Selkie should ideally avoid physical bulky blue and especially green units as she cannot withstand any sort of hit from them and will likely not scratch them significantly. Bow and Dagger users also easily attack from a distance where her transformed effect has no bonuses while targeting her lower Def.

Reposition is the standard support skill for any direct attacker to move allies out of danger and potentially putting in Selkie in between to battle an enemy she is better at dealing with. Fury gives her a nice flat boost to her core stats and the recoil can put her into range of Desperation as her high Spd does mean that she can double most of her opponents and performing the immediate follow-up makes it safer for her to engage. Chill Defense also works nicely as the debuff does not require the same conditions as her Sabotage skill and it weakens an enemy for either her or her ally to deal with. Distant Counter can also be run if wanting to check mages as it allows her to counterattack rather than just soaking the damage alone.

New Year's Spirit
A carefree kitsune. She's dressed up in a kimono and ready to join in the New Year's celebrations. Appears in Fire Emblem Fates.

Selkie heralds the new year as a colorless beast cavalry unit and more or less retains her base form's strengths and weaknesses, but much more optimized. Her Atk is mediocre and her Def is even lower, but her magical bulk and Spd receive a slight boost. The lack of color also serves as an advantage for her as she is not subject to the color triangle, broadening the range of units she can now attack without losing damage.
New Foxkit Fang accelerates New Year Selkie's special cooldown and if her Res is higher than her opponent's, she deals up to 70% of the difference between the stat with a maximum 7 bonus true damage per attack. This can ultimately be devastating for enemies who have a huge Res disparity and can mean the difference between them surviving combat against her. Also if her Res is higher than her opponent's, she takes reduced damage during combat and from area-of-effect skills by a percentage based on the difference of the stat x4, maximizing at 40% reduced damage. If she is adjacent to only beast/dragon units or not adjacent to any ally, she transforms, gaining +2 flat Atk and if she initiates combat, she inflicts Atk/Def-4 on her foe and they cannot perform a follow-up attack.
Iceberg again naturally fits Selkie, but now her neutral true damage boost is 20. Distant Ward is a new skill she introduced, allowing her to counterattack Tome, Staff, and dragon foes regardless of range while boosting her Atk/Res by 5 when they initiate combat, giving her an excellent means to check mages. Sabotage Speed causes any enemy who is adjacent to another enemy to lose -3 Spd if they have at least three less Res than New Year Selkie at the start of her turn. While a powerful debuff, it requires a very specific enemy formation to utilize, thus it has inconsistent activations. Odd Resistance Wave increases Selkie and her adjacent allies Res by 6 at the start of odd numbered turns, perfectly synching with her weapon.

New Year Selkie more or less retains the same weakness as her base form. The lack of color means that bulky units in general, regardless of color, can be problematic for her and physical enemies in general deal massive damage to her. While Distant Ward makes her a tremendous threat to Tome and Staff users, Bow and Dagger do not trigger its effects, thus they can deal massive, uncontested damage, likely dispatching her in a single round of combat.

Reposition is a standard, but effective support skill that helps with positioning of allies. Noontime can be considered if wanting to turn her into a pure magic tank as the accelerated cooldown of her weapon allows her to immediately recover health on retaliation. Distant Counter allows her to check some Bow and Dagger units at the cost of losing her in-combat stat boost of Distant Ward, but it is not entirely necessary. Fury can give her a flat boost to her core stats and in combination with the recoil, she can put herself into Desperation range quickly. Chill Defense makes a nice alternative as it reduces the bulk of the highest Def enemy, softening them up for her or her allies.

Selkie is illustrated in the trading card game Fire Emblem Cipher with the following cards: 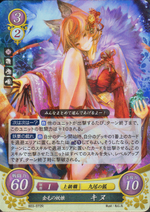 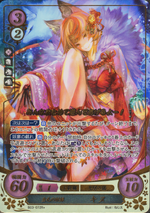 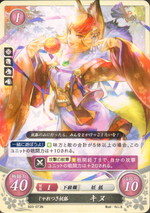 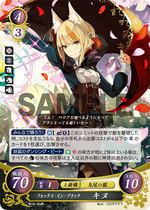 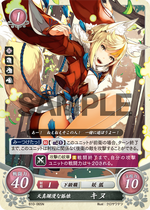 Selkie are mythological water spirits that resemble seals that can remove their seal pelt to take on human form and walk on land, similar to the shapeshifting nature of her base class. The name was probably chosen due to its resemblance to the word "silky".

Kinu (絹) means "silk" in Japanese. Phonetically, it is also the name of a Japanese warship, although in this case the warship is a light cruiser instead of a destroyer like some other characters.