Chapter 9: The Emblem of Njörun

Arch Knight
[view]
“I hoped to become a good mother like Lady Ethlyn when I grew up. But then...that nightmarish incident at Aed...”
—Selphina, in a conversation with Glade

Selphina is a playable character from Fire Emblem: Thracia 776. 26 years of age, Selphina is a knight of Leonster. She is also the daughter of Dryas and the wife of Glade.

Before the fall of Leonster, Selphina was briefly raised alongside Leif, where she acted as an elder sister to him. She in turn looked up to Leif's mother Ethlyn as an elder sister. Selphina is also familiar with Lachesis, who had briefly stayed in Leonster with her daughter Nanna.

This connection was, however, cruelly cut short when Ethlyn was slain alongside Quan and a squadron of Leonster knights in the Aed Massacre. Leonster fell shortly after, and Selphina was separated from Leif, Nanna, and Lachesis when they fled from the country with Finn.

Selphina first appears in Chapter 9, where she leads the defence of General Hannibal's mansion when it comes under attack by the Thracian army. Flanked by Cain, Alva, and Robert, she marches out to meet the foe in battle.

Leif's army eventually rendezvouses with Selphina, where she reunites with Leif and Finn. She can also talk to Carrion, whom she praises for his good work before entrusting the Elite Sword to him.

After Leif's army emerges from Dakia Forest and enters Tahra in Chapter 13, Selphina reunites with her husband Glade. The couple will discuss which of Leif's parents he resembles more, after which Glade reveals that he has bought a Hero Bow for his wife, entrusting it into her care.

Selphina then goes on to continue supporting Leif in his cause to liberate Northern Thracia from the Grannvale Empire. Retiring from her position after the new Kingdom of Thracia is established, Selphina converts her mansion into an orphanage to take care of children who lost their parents during the war. With many of the children she cares for later becoming great heroes in their lives, Selphina comes to be called the Mother of Thracia.

Selphina is characterised as a stalwart and courageous woman, unhesitatingly taking the command of a small battalion to defend General Hannibal's mansion when it is threatened by hostile forces. Leif has fond memories of her from his childhood, recalling how he always viewed her as an older sister figure in the place of Altena, whom he never met.

Selphina's strength of character is complemented by her sentimentality, which is shown through her interactions with Leif and Finn, where she vividly remembers the past and is grateful for the chance to be reunited with them. She is also known to be emotional, as can be seen when she lashes out at Finn as she thinks that he had abandoned Lachesis.

Selphina is also a compassionate person, choosing to retire from her position as a renowned warrior to convert her mansion into an orphanage to house children who had lost their parents during the war.

Selphina starts off at a fairly decent level with good base Speed and a high Bow rank. This lets her use stronger bows like the Killer Bow and Brave Bow to offset her mediocre Strength. Being a mounted unit, she has great mobility outdoors, and can employ hit-and-run tactics to a high degree of success. Sharing supports with the Leonster knights and Leif, Selphina also enjoys an excellent mutual support with Glade that has double the regular amount of bonuses.

Selphina also comes with the personal skill Charge, which can be both a boon and a bane. Potentially, this skill allows her to attack the enemy numerous times in a row from afar, especially with the Brave Bow. It has its drawbacks though, as she can be attacked by an enemy multiple times in one round. This is especially dangerous for long-range attacks, such as those coming from Ballistae or Bolting. Due to her low durability, Selphina will have trouble surviving these threats. The player should make use of her high Movement outdoors, the Canto skill, and supports to keep her out of harm's way. Since she attacks mainly from a range, she should not be in danger most of the time.

Selphina can also be given Crusader Scrolls to boost her growths, particularly in Strength. This in turn raises her ability to reliably fell enemies.

If the player does not intend to use Selphina, it is still recommended to bring her to Chapter 13 to talk with Glade and receive the Brave Bow, which is the best bow in the game. Unlike with Finn and his Brave Lance, the Hero Bow is not locked to Selphina and can thus be given to other bow users like Xavier.

(The following part ensues only if Leif already spoke to Selphina)

Selphina: Glade, you're all right. Thank goodness...
Glade: Selphina... You came as well?
Selphina: Yes, I heard about Tahra and came with Lord Leif. I'm so glad I found you...
Glade: I'm sorry I worried you. But Selphina... I have led many young men to their deaths once again. I can't help but regret and wish that I had more power...
Selphina: No! You are the finest knight in Leonster. I am proud to be your wife. So don't blame yourself so much...
Glade: Thank you, Selphina... I feel better after seeing you. Oh... Here, take a look at this.
Selphina: What is this? ...Is it... Is this the legendary Hero's Bow!?
Glade: It looks like it. I came across it by chance. I bought it for you, would you use it?
Selphina: Of course! Thank you, Glade.

Selphina: Glade, you're all right. Thank goodness...
Glade: Selphina... You came as well?
Selphina: Yes, I heard about Tahra and came with Lord Leif. I'm so glad I found you...
Glade: I see. I met the prince earlier, but I was surprised at how much he's changed. It's been 10 years since I saw him at Alster... He's already fifteen now.
Selphina: I was also surprised when I first saw him. He's grown so much.
Glade: Indeed, he's become a fine young man. He's starting to look like Lord Quan in his youth.
Selphina: I thought he looked more like Lady Ethlyn. He has her eyes.
Glade: Do you think so? I think his eyes come more from Lord Quan.
Selphina: No, they come from Lady Ethlyn! She used to look after me like a little sister, so I remember very well!
Glade: Whoa, there's no need to get so excited. He's their child, he looks like both of them.
Selphina: Oh...you're right. I'm sorry. I was just remembering Lady Ethlyn, and...
Glade: ...... She must have regretted leaving her son behind...
Selphina: Yes... Back then...Lady Altena used to be jealous of little Lord Leif and Lady Ethlyn. They seemed so happy together... I hoped to become a good mother like Lady Ethlyn when I grew up. But then...that nightmarish incident at Yied...
Glade: Selphina...?
Selphina: I'm sorry... I told myself I would never cry again...
Glade: It's all right... Oh... Here, take a look at this.
Selphina: What is this? ...Is it... Is this the legendary Hero's Bow!?
Glade: It looks like it. I came across it by chance. I bought it for you, would you use it?
Selphina: Of course! Thank you, Glade.

"After the New Kingdom of Thracia's army had been stabilized, Selphina resigned from her post as an officer. Instead of becoming a mother, she opened her family's mansion to the many children who lost their parents in the war. The orphans she saved grew up to be great men and women: a new generation that guided Thracia into the future. Because of this, Selphina is not only remembered as a knight, but also as the "Mother of Thracia." For centuries afterward, people would invoke her name for good fortune, hoping to inherit her strength and kindness."

Selphina is illustrated in the trading card game Fire Emblem Cipher with the following cards: 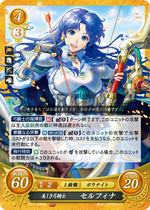 Artwork of Selphina in Fire Emblem 0 (Cipher) by Enji Kazura.

Selphina as seen in the Fire Emblem Trading Game artwork

Selphina as an Arch Knight in Fire Emblem 0 (Cipher).

Selphina as a Bow Knight.

Selphina as a dismounted Bow Knight.

Selphina as an Arch Knight.