{{The Sentinel ( Hōrī ransā, lit. Holy Lancer in the Japanese version and Lancer in PAL region game versions) is a combat physical class that is first introduced in Fire Emblem: Radiant Dawn. The promoted form of the Halberdier class, the Sentinel, like its Japanese name suggests, wields Lances as its sole weapon of choice. It is the highest class tier of the Lance-wielding class tree that it appears in.

In its original inception in Radiant Dawn, the Sentinel class is the final promotion in the Soldier class line, directly promoting from the Halberdier class. Unrivalled masters of the Lance, this class is able to master the devastating Impale skill when the necessary requirements are met.

Sentinels are very strong units. With all-around high stats, they can sustain, dodge (or block, since Sentinels use shields for their dodge animations), and deliver many blows to inflict substantial amounts of damage. They are more preferable to Marshalls, since they are easier to train in all class forms, although they are only confined to wielding Lances while Marshalls are able to handle all physical melee weapons. 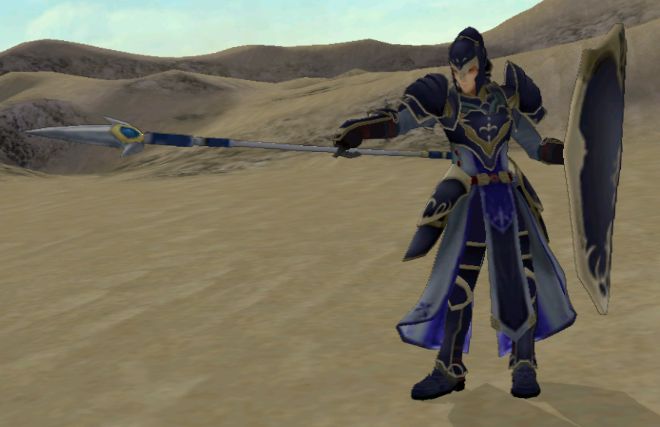 Nephenee's battle model as a Sentinel in Radiant Dawn.

Aran's battle model as a Sentinel in Radiant Dawn.

Danved's battle model as a Sentinel in Radiant Dawn.
Add a photo to this gallery
Retrieved from "https://fireemblem.fandom.com/wiki/Sentinel?oldid=489631"
Community content is available under CC-BY-SA unless otherwise noted.