General of the Begnion Army

Septimus (ノーズ Nōzu) is a Secondary Antagonist/ enemy character from Fire Emblem: Radiant Dawn. He is one of the generals in charge of the Begnion forces. he is Also the Boss in Chapter 3-8 despite being first seen in part 3 Prologue. He Also scared of the Laguz Even though he is a General in the Begnion Central Army.

Septimus is first seen in the prologue of the third part The Great Advance. at the border fortress of Flaguerre, where he is discussing the sizes of the force that should be taken out to take out the laguz. His aide, Silvano, is saying that they were only simply taking the rounds that day, when a soldier cries out that the "sub-humans" had reached Flaguerre, leading Septimus to gloat that he is right. When either the Greil Mercenaries or the Gallian army reach the thickets that are near the fortress, Skrimir yells that he is the general of the army and nothing can stop him, and Septimus goes crazy and says that the laguz would eat him and run in cowardice, leaving Silvano to command the forces.

Septimus is prejudiced against the laguz and afraid of them operating under the propaganda that they consume Beorc flesh, fearing that the Laguz might kill him. In the Kauku Caves, Senator and Begnion Imperial Army Commander Valtome orders him to lead the force to "Collect the bodies of the Laguz Alliance" while the Laguz Alliance flees into the caves to escape the Begnion forces. General Septimus and a large group of Begnion soldiers charge into the cave, not knowing that the Laguz Alliance is alive, well, and ready for combat. While Skrimir searches for an exit out of the cave, Ike leads the forces which distract the Begnion forces and take down Septimus.

“Why... Why do I always get stuck with these awful missions? I should have curried favor with General Zelgius! Then perhaps I wouldn't have had to step into these ghastly caves..."”
—Septimus Quote in Ch 8 Incandescent Glow

Septimus: They told me the enemy would be burnt by the time I reached them. The only thing I'd to do was carry their dead bodies back as proof...It's just my luck the enemy is alive and well! Why does this always happen to me?

Septimus: Wh-Who are you?!
Ike: Ike of the Greil Mercenaries. You don't look too good. Maybe you should just leave...
Septimus: Wait a moment... HAH! Look everyone! Look at this one! He's not a beast! Oh, thank the goddess! Victory is nigh!
Ike: So... Chasing us into these caves wasn't the plum assignment that all the best generals wanted, huh?
Septimus: How DARE you! Take my spear, knave!

Septimus: AHHH! Th-they’re here! Th-th-the sub-humans! The mongrels are here! They want to consume me! 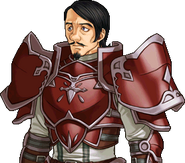 Septimus' battle model as a Lance General in Radiant Dawn.
Add a photo to this gallery