Canto
Stun
[view]
The Seraph Knight ( Enriru naito, lit. Enlil Knight in the Japanese version) is a Pegasus-mounted combat physical class that is exclusive to Fire Emblem: Radiant Dawn. The promoted form of the Falcon Knight class, Seraph Knights wield Swords and Lances as their weapons of choice.

Most Seraph Knights (with the exception of Tanith) will not gain much Strength, but with the skill Stun and plenty of Skill, Speed and Resistance, they make for good units nevertheless, as they are able to execute attacks that are swift and accurate.

"Seraph", also known as Seraphim, is the name of the ranking for an angel. Medieval Christian theology places seraphim in the highest choir of the angelic hierarchy. They are the caretakers of God's throne, continuously singing "holy, holy, holy".

The class's Japanese name, Enlil Knight, refers to the deity of the same name. Enlil is the ancient Mesopotamian god associated with wind, air, earth, and storms. His association with air is so strong, not only does his name literally translates to "Lord Wind", the ancients saw him more as a personification of the wind.

Battle model of Tanith as a Seraph Knight. 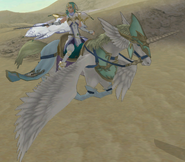