--
[view]
Seraphim (エンジェル Enjeru, Angel in the Japanese version) is a Black Magic spell from Fire Emblem Gaiden. It does effective damage against monster-type enemies. It is typically used by female characters, although Saber can also learn it. 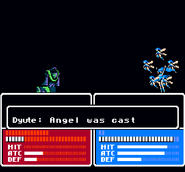