Bow Paladin
[view]
“Of course, Senator Valtome! I'd be happy to kill the wench.”
—Sergei, upon receiving orders to kill Elincia

Sergei (セルゲイ Serugei) is an enemy character from Fire Emblem: Radiant Dawn. He is a Bow Paladin from Begnion and a general of Senator Valtome's personal army.

Sergei appears in Chapter 3-10 along with his hierarchy. To fulfill Valtome's wishes, he openly defies Zelgius's orders and pursues Elincia with the intention of killing her, despite her laying down her weapon to prevent a war between both sides from happening.

Unfortunately for Sergei, his sense of action leads to him his final battle and he is, however, killed by Ike's Army.

Serving as a boss character for a single chapter, Sergei's personality is largely unknown. Despite his minor role to the game's plot, some aspects can still be gleaned from the little dialog he contains. For one, Sergei is portrayed as a cruel, steadfast and loyal individual towards his senator, Valtome. Ignoring the orders even from a knight like Zelgius, who outranks him in any manner, he openly favors Valtome's wishes in hopes of slaying Elincia to the public eye when she disarms herself on the battlefield, rather than laying down his own weapon to avoid the senseless bloodshed.

He is also quickly to assume that because Ike commands a band of mercenaries and are allied with Laguz alliance, he can easily buy them out with senate's riches. This method is quickly disproved when Ike cuts his sentence and confirms the Greil Mercenaries choose their own employers, and not even senate's corrupted riches can win them over.

The usual strategy is to corner and surround Sergei with melee units so he cannot move. Also, strike with weapons that can perform direct attacks. When you win, you obtain a Silver Bow.

“Fools! How dare you fight my master? He is Senator Valtome, duke of Culbert! Die in his name!”
—Sergei's default battle quote

Sergei: We are under the direct orders of Senator Valtome! His words carry the weight of the entire senate! Mercenaries! You know how war works. You know that Begnion can pay--
Ike: Save your breath. The Greil Mercenaries choose our employers. All the wealth in the senate couldn't buy us. Lay down your bow and surrender.
Sergei: What? Wretched fool! You'll rot in the ground next to that treacherous girl. 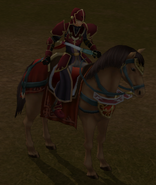