Chapter 5: Beyond the Borders

Kate Higgins
[view]
“Hey. Where are you going? Come on. Over here, over here! Lord Hector said you have to stay by my side, no matter what, right? I am a sweet, helpless little cleric... You have to protect me!”
—Serra to Matthew in The Blazing Blade

Serra is a playable character from Fire Emblem: The Blazing Blade. She is a high-maintenance cleric who is a member of the St. Elimine Church, and believes she deserves praise from everyone around her. Serra is sixteen years old in Lyn's story and seventeen years old in Eliwood's and Hector's story.

Serra's past is never fully elaborated on, but it is known that she was born in Etruria, and for reasons unknown was raised in a scanty St. Elimine convent near the Etrurian/Ostian frontier, where she studied the teachings of St. Elimine. During her childhood, she was greatly neglected and badly mistreated, a miserable past that would contribute to her personality later on. Eventually, she became a cleric and entered service with Ostia.

Journeying to Ostia with her less-than-enthusiastic escort, Erk, Serra becomes entangled with Lyn's group on the border between Sacae and Lycia. Much to the displeasure of her escort, Serra joins Lyn on her quest to reunite with her grandfather. After Lundgren is killed and Caelin's monarchy restored, Serra and Erk depart, and both part ways at Ostia. If Serra is attacked and defeated by an enemy in Chapter 5, she will instead send Erk with Lyn, stating that she is too hurt to continue, staying behind alone to wait for her wounds to heal.

Serra is encountered again in Lycia, as part of Hector's group. Seeing Eliwood and his knights harassed by bandits, Hector orders her and Matthew to stay back while he and Oswin assist Eliwood. Serra, along with Hector's group, then joins up with Eliwood's party.

In Chapter 15E/16H, Serra can speak to Lyn, where, true to her misplaced pomposity, she will declare her all-too-noble intention to save Lyn. At this stage, Serra also establishes that she considers Lyn to be a dear friend.

At the end of this journey, Serra returns to Ostia and relaxes. Depending on her supports, Serra could potentially be paired up with Erk, Matthew or Oswin.

Due to her misfortunes as a child, Serra develops a high-maintenance, egotistical, and somewhat cowardly personality, one coupled with a talkative inclination. In the story and most of her support conversations, her unrestrained behavior is the main irritation for most of the characters. But for some characters like Matthew, she eventually reveals her vulnerable side, where she drops her princess-like façade to reveal a fragile psyche, pointing towards the fact that her personality is just a way for her to get attention, something that she longed for but never got as a child.

Serra also shares a rather amusing one-sided "rivalry" with Lucius in their support conversations. She mistakes Lucius for an exceptionally beautiful woman and treats him with disdain and jealousy at first, although both eventually become fast friends after she learns that their upbringing is similar.

Description: A cleric in service to House Ostia. Headstrong and bold.

Serra is your first Cleric and healer to join you in the entire game, which is pretty useful since most of your unpromoted units will be rather frail early on and appreciate her healing at any time. As a unit that cannot attack at all, she should be kept far away from combat all the time upon promotion, which is further emphasized by her horrible durability against physical attacks. This also makes most of her stats pretty redundant for most of the time, but her low base magic is remarkable nonetheless, since it keeps back her magic stat despite her good magic growth rate, especially considering she only gains 1 additional point of magic when she promotes to Bishop. Her speed, resistance and luck bases and growths are pretty decent though.

While Serra is quite useful early on due to her staff utility, she has trouble competing against later staff users: Priscilla comes with the advantage of being mounted and getting access to stronger Anima magic tomes. Serra also gets overshadowed by Lucius once he promotes to Bishop, since he'll have a lot more magic and a better light magic rank than her while also gaining a high staff rank. Canas and Erk only have an E staff rank when promoting, but come with the advantage of having superior combat and can make it to C staves before the first enemy status staves appear if they spam low level staves after early promoting. Thus, it's usually preferable to use at least your first two Guiding Rings to promote some of your other magic users.

However, depending on how much experience you want to feed to other combat units and how fast you make it through the earl ygame, it can happen that Serra get's into promotion range before Erk, Lucius or Priscilla. In this case, it might be worth considering promoting Serra early instead, just to have a staff user who can retaliate. While her combat isn't fantastic, she hits on enemy resistance which is usually low, and her decent speed allows her to double most enemies when using a Lightning tome, making her capable of dealing a fair amount of damage if she needs to fight (though it's unlikely she'll ever one round-KO any enemy at full hp). Her durability will still be low, but she won't get one-shot by any physical unit anymore and have decent avoid thanks to her luck and speed. Another Point in Serra's favor is her higher staff rank compared to Canas or Erk, which allows her to use higher level staves like Physic, Barrier or Restore without the need to grind up her staff rank, also making her a good candidate for promotion later on if you need an additional staff user. Her high staff rank is also a double-edged sword, as it is very easy for Serra to reach S Rank in staves. Because there are no S-Ranked staves for the player to use, this does nothing but harm Serra by locking her out of achieving an S Rank in Light. Players wishing to use Serra as their primary or only Bishop should take care to avoid this.

To sum it up, while Serra will most likely be outclassed by most other units with staff utility long term, but she can contribute by healing your units during the more difficult earlygame and accumulate experience without reducing the experience gain of your combat units. She is very unlikely turn into an amazing magic wielding juggernaut if promoted due to her low magic base and constitution, but always be a decent target for your Guiding Rings thanks to really good staff utility and the low resistance as well as shaky hitrates enemies have throughout the game.

Serra also fits the Lena archetype, due to her relationship with the thief Matthew.

Outspoken Cleric
Cleric who thinks less of others, more of herself. Serves Hector, brother of the Marquess of Ostia. Appears in Fire Emblem: The Blazing Blade.

“Uh-oh! I think we've been surrounded! Uh...but I'm not worried a bit. I'm with you after all, Mark. We make quite a team. Right. Come on, Mark! Let's get started!”
—Serra in The Blazing Blade

“Blessed Saint Elimine, grant us the strength to win this with ease.”
—Serra in The Blazing Blade

“Ooh! Why me? This is SO annoying!”
—Serra's death quote in The Blazing Blade

Defeat Quote in Chapter 5 as a green unit[]

“Oooh! This is unbearable! I suppose I'll just have to lie here and play dead for a while.”
—Serra when defeated in Beyond The Borders before she is recruited

Ultimately, Erk succeeds in seeing Serra safely to Ostia. While her behavior is irritating at best, she is sorely missed. Her ascerberic tongue has become legendary.

Serra returned to Ostia. She spent much time tending to her own affairs, but lately, she has begun to enjoy her free time.

After the battle, Erk returned to his studies. His newfound feelings for Serra were an unwelcome distraction. In Ostia, Serra declared she would “live for love” with Erk, and Marquess Ostia gladly saw her off.

Serra is illustrated in the trading card game Fire Emblem Cipher with the following cards: 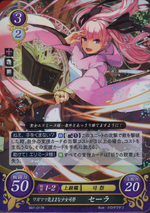 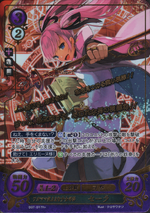 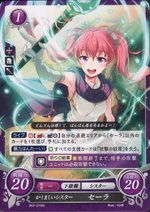 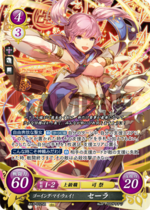 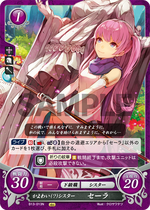 Serra is the Portuguese word for "hill", "saw" and is also a common surname. Sarah, of which Serra can be derived from, means princess in Hebrew.